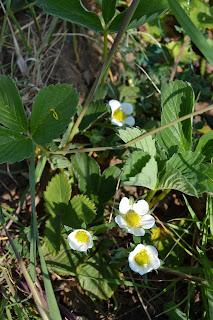 The current dry weather conditions are playing havoc with our plans at Bressingham (the old allotment) In February I couldn't dig because the soil is so clay-y I couldn't stand up straight on it, pushing on a spade merely propelled me backwards through the slip. I missed the nanosecond when the weather dried up and the soil was in peak digging condition and, minutes later, it had dried out and set so rock hard that even jumping two footed onto the spade won't drive it into the ground.
My plan was to dig up the grassed area where the kids play, give them horsetail corner for playing instead, and transfer the strawberries to the rather more fecund original play area. Adam complained that digging up the turf in the compacted, played on soil, was heavy going so we put Roundup down thinking dead grass would be easier to grub up than living. By the time the Roundup had worked, the soil had set rock hard so we decided to wait for rain before we continued digging.
We waited, and waited and waited .......
8 weeks later we've only had one small shower of rain. The play area is still only half dug, the strawberries are snug in their original home and are now flowering determinedly, the broad bean seeds have died and the purple sprouting broccoli is running to seed and needs digging up but everything is locked into the concrete soil.
By contrast, the soil at the new allotment on Louie's Lane is a joy. It's like fine sand, free draining and easily heaped over the potatoes (the Ulster Sceptre are doing fine), seed drills are drawn in the blink of an eye (rather than seeds slipping down between huge cobbles) but walking over it is hard on the calves (my legs, there are no baby cows there) but other than that it's allotmenteering heaven.
The 2011 season is beginning in earnest now as my seedlings are slowly emerging from their coldframe home and being planted out in the big wide world of the allotment. The next few weeks will be hard work as I mollycoddle them into life but once they've got a toehold I should find out if my split site strategy will work and I actually have the resources to manage 2 allotments - oh and not forgetting the Diss Community Farm pig rearing project!
Posted by Tracey at 13:53 7 comments: 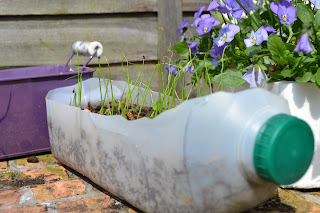 Had to get that pun in somewhere as I'm so proud of it! It's my suggestion for the name of the seed growing 'club' that a couple of friends and I have formed. The idea being we would co-ordinate our planting (eg, I do courgettes, Anna does lettuce), grow a few extra seedlings and then do a vegetal runaround, swapping excess plants. Of course this makes my germination rates uncomfortably public. In the past I would be quite sanguine about failures and just buy garden centre plants to fill any gaps. I really should have remembered that I did that with tomatoes for a couple of years on the run, last year was the first year I gave up and just went straight to the garden centre.
I think you've probably guessed where this is going already .....
Most of the seedlings are going well. I have a germination rate of over 50% for the sweetcorn which isn't too shabby. Borlotti beans more or less 100%, ditto courgettes, various squashes, chard, Cavelo Nero, calabrese etc etc
And my tomatoes? The ones which are supposed to be bounteous? Enough to share with friends? The value adding obscure varieties? Nada. Zip. Absolutely nothing. A handful of Tumbling Toms are struggling up but Mr Stripy are stubbornly staying soil bound.
In the meantime, I've taken my first delivery of leek seedlings from David. I had to share his seed tray idea in the photo above, I thought the cut off milk bottle was genius. Of course the size of the donation (the bottle in the photo, plus one more, plus a full conventional seed tray) causes me even more embaressment in having no tomatoes to give in return, let's just hope he likes courgettes ......
Posted by Tracey at 13:29 3 comments: 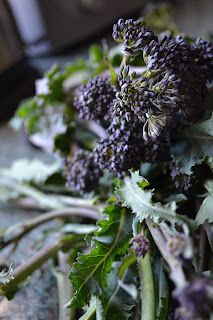 Wow, I finally have an hour to myself (just mistyped that as 'my elf', but I've paid him no attention either) Life has suddenly become overwhelmingly busy as the Norfolk Kitchen empire expands. As you probably know I have 2 allotments for the first time this season. I keep telling myself it's not as daunting as it sounds as both plots are half the traditional size so, really, it's just one plot. That's not too bad is it? Really? It'll be all right won't it??
I took advantage of the glorious weather and visited the Bressingham allotment (the old one) yesterday. Sadly, I forgot my camera which means I couldn't capture the blossom on the fruit trees or the glorious, glowing, shimmering purple of the sprouting broccoli. I photographed it at home but it's just not the same as when it's bathed in sunlight. I'm uncommon pleased with the purple sprouting, I bought a few spare plants from a fellow allotmenteer for 20p, stuck them in the soil and ignored them til now and suddenly, unexpectedly, I have this gourmet treat (stir fried in olive oil with anchovies by the way)
When I'd finished swinging a matock while sweat dripped off my nose in an attempt to dig over the sun hardened clay of the ex-Cavolo Nero bed, I called at the new allotment to check out the rotavating a friend did for me. The soil is beautiful, as fine a tilth as sand. I surveyed my blistered hands and could've wept!
Added to the extra land I've taken on 3 extra chickens making a total of 5, plus I'm getting quite heavily involved in the Diss Community Farm Livestock project. The Community Farm is basically a co-operative of local people, we're hoping to rent some land, work on it ourselves, share the produce and have a few laughs along the way. It's a huge project to get off the ground and lots of people are working very hard on it. The hope is that the Farm will become a reality next year and in the meantime we're running a couple of small pilot projects to test our plans and procedures. The vegetable growing project I'm leaving alone (see above) but the Project Piggy is a different matter ....
A local landowner has agreed to lease us an area of woodland of about 2 acres for a peppercorn rent and a side of pork, our plan is to keep a few pigs and some nice fierce geese to keep them safe from marauding teenagers. If all goes well we can scale up for the farm proper.
We're holding a Family Cream Tea this Sunday, 10th April, at Roydon Village Hall at 3pm. Please come along if you'd like to find out a bit more about our project or get involved. And if you're very lucky, you may even get to sample a little Norfolk Kitchen jam (but not the courgette and ginger which was very firmly rejected!)
Posted by Tracey at 13:42 8 comments: