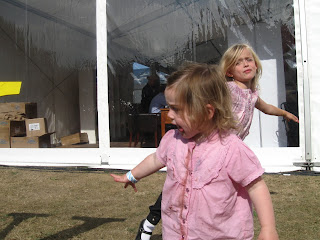 This photo makes me smile because it totally encapsulates my experience of the Aldburgh Food Festival this year. In the foreground, Willow and Xanthe are pretending to be statues while squabbling about who gets to be in the photo, in the background, you can just about see a blue shirt inside the marquee. That's Tom Aikens, Michelin starred chef who is holding a book signing, shortly after coming off the main stage.

Because Adam and I are the parents of small children, we are not inside queueing to shake Tom's hand, or nodding sagely in the Sheila Dillon discussion forum, we are not even making the most of sampling all the wonderful food, instead we are sitting on the grass outside, eating ice cream while covered in the sick of a 2 year old who ate too much chocolate cake.

But the day was not lost by any means. It's true we weren't able to concentrate fully on the speakers but on the plus side when we sat on the grass outside the Marquee we had unwittingly plonked ourselves right by the 'stage door', the effect being magnified even more when the sides of the Marquee were opened and we were suddenly mere inches away from the book signing table and the main stage.

While we sat in the sun Fergus Henderson tottered past, straining under the weight of an enormous cool bag (whose corners just skimmed my head) and Tom Aikens signed books over our heads while we pretended to be invisible, so we felt we were in the thick of things, well, clinging to the periphery anyway.

The children had a wonderful time both in the childrens' corner and in the main tent. Willow was uncharacteristically adventurous in her tastings, preferring smoked cheese to chocolate biscuits, unfortunately, Xanthe didn't feel very well so didn't want to try anything and eventually meant we had to leave early, though you'll be relieved to learn that I did manage to eat a pork pie and have a pint of Aspall's before we left.

I've still got a few fringe events to check out so hopefully my Aldeburgh Food Festival experience for 2009 isn't over yet.
Posted by Tracey at 07:01