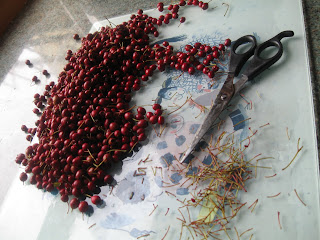 This ketchup has seen me run the full gamut of emotion, from eager anticipation through boredom and frustration to eventual triumph. The recipe comes from Pam Corbin's book River Cottage Handbook No2, Preserves. I was keen to try it as haws are so abundant it seems a shame not to make use of them somehow and I'm always keen to try out a new taste.

In all honesty I found the preparation a royal pain in the arse. Picking the berries takes forever as they're so tiny then they have to be painstakingly snipped, one by one, from their stalks with scissors. Cooking is quite time consuming as they take ages to soften and then putting them through a moulis to separate the skins and stones from the flesh has given me a dodgy shoulder and a stack of washing up a mile high. I was quite disappointed with the yield as after all that effort I only had one bottle.

However, all is not lost, the resulting ketchup is fantastic, rich, fruity and spicy. It also keeps for 12 months without any additional canning process which is an improvement on the plum ketchup I made from the Gardener's World magazine which only keeps for 4 months unopened. For that reason alone I'd make it again to keep in the cupboard and cheer us up in the new year.

Snip the haws from the stalks and rinse in cold water. Place in a pan with the vinegar and 300ml water, simmer until the skins have turned brown and split to reveal the flesh inside. Remove from the heat and rub through a sieve or pass through a moulis.

Return the puree to the pan with the sugar, heat gently til it dissolves then bring to the boil and cook for 5 mins. Season with salt and pepper, pour into sterilised bottle and seal with a vinegar proof lid.
Posted by Tracey at 17:59