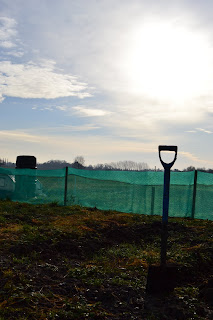 What an amazing day yesterday was. It's been like spring here in Norfolk, I can't believe it's only January. Although it's very pleasant it's also quite disorientating to go straight from heavy snow to verdant new growth and we all know we can't trust spring after last year's seedling destroying late cold snap.
Global warming concerns aside, I grabbed the opportunity to plant my raspberries and survey the snow damage on the plot. I haven't been to the Bressingham plot for some time because it's been impassable to vehicles for months now. The vehicle access isn't hardcored or metalled in any way and was quickly reduced to a quagmire with the onset of Autumn. The only solution is to leave the car on the road (much to the annoyance of local residents and passing farm vehicles) and totter unsteadily through the slutch and ruts - it's not an appealing prospect in bad weather with small children in tow.
I wasn't surprised to see the Rainbow Chard completely felled by the snow although clearing away the dead leaves revealed new leaves already beginning to grow again. The Cavolo Nero on the other hand is looking positively refreshed after it's ice bath, it's not only survived but actually grown. Despite this, I'm having doubts as to whether there's any advantage to growing Cavolo Nero as opposed to a bog standard savoy cabbage. I can't really taste much difference and have become dissatisfied with the stalk to leaf ratio of the former so may plant the latter instead this year.
The bad news is I think we've got rats in the compost bin. Other plot holders have seen them around the site and compost appears to have been thrown out from inside of the bin. My immediate response was the pull the Macaulay Culkin Home Alone face and sprint away as fast as my clay encased boots would allow. Naturally I will not be investigating further until I have my husband on hand to hide behind.
So, the next task is to sift through my seed packets, assemble my cold frame and plan a timetable for seed planting. I'm still in the process of tracking down my Ulster Sceptre seed potatoes, there aren't any in the local Garden Centres and my parents can't find them in the north west either. On-line suppliers are showing stock coming in during February so maybe they'll appear in the shops in a few weeks but if anyone knows of a Garden Centre in South Norfolk or Warrington which may have them, I'd love to hear from you.

My boots yesterday. Soil as clay as clay can be.
Posted by Tracey at 09:24