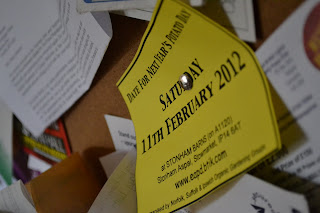 I finally got hold of my Ulster Sceptre seed potatoes thanks to the 2011 East Anglian Potato Day. It was the first time I've been to one of their events and it was an education! I envisaged a market stall type set up and as I only wanted a small number of one variety I thought it would be fairly easy to quickly drop by and pick up what I wanted.
It was a shock to the system then, to arrive at Stonham Barns and be faced with actual queues of traffic waiting to get in. I finally parked and was directed to the marquee by a helpful car park attendant who admired my parking spot and cheerfully exclaimed "At least you won't get stuck in the mud like the others!". Outside the marquee, I tagged on to the end of a huge queue of people in wellies with that outdoorsy sheen of mud and rude health about them and shuffled patiently towards the door. Apparently those in the know get there early and start to queue before the tent's even open.
Inside I was faced with a frantically busy potato jumble sale, complete with steely eye glints and sharp elbows. Rows of seed potatoes were laid out in alphabetical order, punters fill paper bags with their required varieties and then commence the arcane payment procedure which involves a two stage tally ("Did you not count them?") and pay ("Did you not write the name on the bag?") system.
I paid 12p per potato plus my £1.50 entry fee. For my small haul that worked out at roughly the same as garden centre prices but clearly, further hauls would have yielded greater savings. Indeed, I was mildly surprised to see people tottering under the weight of bags of life stuffed to the brim. The only reason I was so restrained quantity wise is the gift of two bags of seed potatoes (Arran Pilot and Nadine) I was given by a fellow allotmenteer which I already have tucked away at home.
It took much longer than anticipated to make my small purchase but what a great event! I love the fact that there are so many people out there who are obviously bonkers enough about potatoes to stage the event, to queue happily in the mud and to eagerly anticipate Potato Day each year. And thank goodness they do, I've no idea where I would have got my Ulster Sceptre otherwise.
I'm going in for potatoes in a bigger way than I'd planned this year thanks to the seed potato presents I've got but it'll be interesting to test the Ulster Sceptre against a more standard variety and see if there's any taste difference. It would be even more interesting to test them against Ulster Sceptre grown in Cheshire to see if there's any truth in the claim that it's the salty Cheshire soil that makes them taste special.
I'm especially happy to have got through a whole post about potatoes without once saying "the humble spud". Cliche neatly side stepped I think.
Posted by Tracey at 11:46