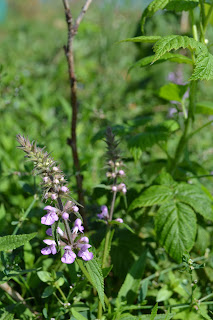 My word but it's sweltery today. I gave myself the day off from mowing at Bressingham as it's a tough job with an old push lawn mower at the best of times, let alone when it's 30 degrees. While I was inspecting the raspberries I found this plant hidden among the canes. I'd love to identify it so if anyone could help, that would be fantastic.
A bit of back ground about the plot which may help with identification; the land began to be used as an allotment site about 100 years ago but had fallen out of use since the 1990's and been left uncultivated since then. Last year was the first year it has been re-used as allotments although we were delayed in getting on the land as some possibly rare wild flowers were discovered, although I don't know what type. They were inspected and declared not rare and we were subsequently allowed on site.
Personally, I think it looks a bit orchid like but I know next to nothing about flowers so am unlikely to be right I think! Failing that, I'd like it to be some sort of historic meadow plant with an exotic name. Toadflax (suggested by Cheeky Spouse on Twitter) is heading in the right direction. I'm rather disappointed that I don't have 'Creeping Ladies Tresses' which I found on an orchid site. Not sure if it's the ladies or their tresses that do the creeping though.
*Update* I've been Googling and I now don't think it is an orchid, the leaves are wrong. Am bitterly disappointed that it's not sneezwort either.
On a massively un-related note, I discovered cooked radishes at the weekend and they're unexpectedly delicious. I used this Riverford recipe, amazing, it gives radishes a whole new lease of life away from the salad bowl. It's inspired me to go and plant not only more radishes but some small turnips too.
Posted by Tracey at 14:00