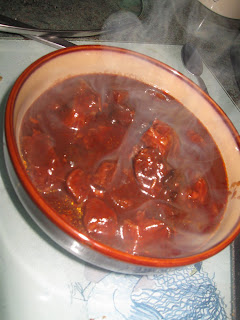 That's my hyperbolic claim for my mushroom and shin beef casserole! I'm very fond of shin beef because it's cheap and full of flavour. It needs to be cooked long and slow to make sure that it's meltingly tender, my butcher recommends 8 hours in the slow cooker. Speaking of butchers, today I used supermarket shin beef for the first time and wasn't terribly impressed. The butcher will cube the beef for me, whereas the supermarket won't, he will also trim the fat off before weighing it but I was disappointed to discover my supermarket offering was cunningly packaged to hide several large chunks of fat which went straight in the bin.

Admittedly I'd rather be using a bottle of good ale in this recipe, but seeing as we're in
Posted by Tracey at 19:44