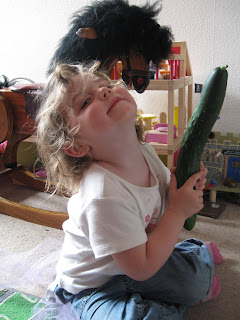 This is what Xanthe considers to be an appropriate 'I grew a cucumber!' pose, it's unclear exactly why. I hadn't planned on growing any cucumbers but we were at a car boot sale a few weeks ago and saw a stall selling vegetable seedlings for 50p each. I offered to buy one each for the children for their section of the allotment, Willow chose a tomato plant and Xanthe chose the cucumber.
I have to admit I didn't think too deeply about either plant, just stuck them in the ground and watered them. The cucumber has romped away, so far we've had this one and the curly one in the previous picture and we still have a few babies too.
The broad beans have finished now so it feels like we're in a vegetal stasis. We've got Rainbow Chard and courgettes a-plenty but are still waiting for the Cavolo Nero, sweetcorn, pumpkins, borlotti beans and runner beans. I also dug out the religious carrots* and have planted peas instead so I hope my allotment book is correct when it says I'm not too late to get a pea crop. I've also planted some red Pak Choi which should be interesting.
My poor home veggie patch is very neglected this year so I'm hoping to lavish some attention on it this week (children permitting) I've just planted my salad tray with a mixture of my favourite mizuna and peas (as a cut and come again salad crop of pea shoots, not for the peas themselves) I figure that should be a nice mix to use either as a salad or a stir fry crop.
I have to admit that, overall, my crops seem to be a little unbalanced in that they're all either green and leafy or beany poddy. I think that's kind of inevitable given that I'm not too keen on root veg which is probably just as well given the wireworm problem. Next year I think I'll mix in some alliums somewhere along the line though I have to keep to my philosophy of growing crops which are either expensive or hard to find in the shops. I'm thinking green garlic but not sure what else. Any suggestions?
* Holy.
Posted by Tracey at 19:12

Email ThisBlogThis!Share to TwitterShare to FacebookShare to Pinterest
Labels: Cucumber