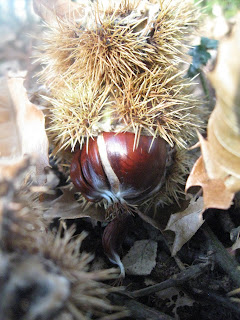 I really should listen to my children a bit more, they are far more vigilant at this foraging lark than we are.
At the park yesterday Adam and I were sitting on a bench enjoying the unseasonal warmth while Willow, Xanthe and their friend frolicked in the distance. Willow periodically mithered us to 'come and look', assuming it was yet another dance show of some description we demurred. However, Willow knows how to get our attention and mentioned the word 'walnut'. Walnuts you say? Now that's different ....
"No, not walnuts, that's not what I mean, the spiky ones, like in the park but edible", "Chestnuts?", "Yes! That's it, chestnuts!"
Last year's chestnut forage was a bit lacklustre. Our usual tree had bizarrely small nuts but I managed to find another with not quite so small nuts so all was not lost but it wasn't bounteous either. However, this year, Willow's new tree was amazing. Adam actually held up one of the chestnuts and scoffed "well, this is clearly a conker, you never get sweet chestnuts this big!" but he was wrong, it was a sweet chestnut. All of them are big, fat, shiny and beautiful. Certainly the biggest chestnuts we've found to date. 15 minutes picking gave us 4lbs of chestnuts.
It's interesting to read last year's blog post. It seems that in 2008 the chestnuts fell in early November. 2009 was a dry Autumn producing under-developed nuts which fell earlier - late September/early October while this year's wet Autumn has produced bigger, later nuts. Adam's hoping to log a couple of decade's worth of chestnut related data so he can produce graphs and suchlike illustrating the correlation between nut size, weather and ripening. Yes, dear reader, I did marry a geek - we all have our cross to bear.
Oh, and we forgot our most basic of nut foraging rules - wear a hat. Adam was narrowly missed by falling spiky chestnut case and I whacked my head on a low hanging branch and have a bleeding scalp to show for my efforts.
So, yeah, wear a hat!
Posted by Tracey at 16:10