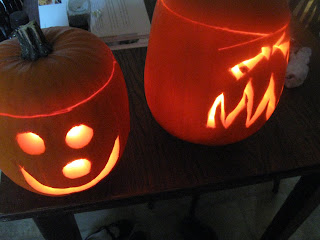 I'm actually in the middle of cooking this right now so have no idea how it'll turn out. Nevertheless, I thought I'd quickly post the recipe as I figure many people will be hollowing out pumpkins this weekend and timely ideas for using up the scrapings may go down well!
Pumpkin and Maple Spread
1.5kg chopped pumpkin (the shavings made when you scrape out the insides with a spoon are perfect)
600g maple syrup (this is roughly 2 bottles. I got mine cheaply from Aldi)
300g honey (roughly a standard jar)
Cinnamon stick if liked.
Stick everything in a big pan and simmer gently for 90 minutes, skimming any scum. The recipe says it can be left chunky or pureed. I'm planning on pureeing mine when it's cool. I'll then heat up the smooth spread back to boiling point to kill off any bugs and pack into sterilised jars which should keep for 6 months.
Suggested uses include:
Spread on Toast
Drizzled over waffles and cream
Combined with cream and eggs to make a pie filling
Eaten with a spoon when feeling low.
This recipe is from Nick Sandler and Johnny Acton's book 'Preserved'. I've never made it before, but will report back on the success or otherwise in more detail tomorrow when it's done.
*Update* It's a roaring success! Sweet, caramelly, spicy, gorgeous. We had it spooned over quince crumble with vanilla ice cream, I think it's probably best thought of as a dessert topping/syrup type of affair rather than a jam.
This recipe made 3 jars so I'm thinking of using the rest of our stash of somewhat insipid orange pumpkins to make some more.
Posted by Tracey at 12:36