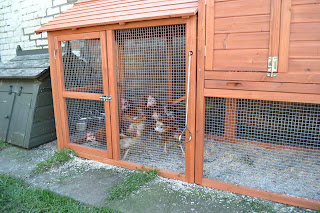 Wow, what a chickeny weekend we have had. We decided to buy a bigger new coop so that we could put non-laying Feathers out to retirement and replace her with 3 new point of lay hens. The coop was ordered when I received a call asking if we had space for a few ex-batts someone was collecting. I immediately agreed to take 3, now that we'd had a bit of chicken keeping experience I felt more confident about taking on chickens who potentially could have some problems, plus there's the fuzzy glow of doing something good, plus, well, umm, they're free so I've saved the best part of £60.
Once the new coop was assembled we realised that we had room to keep the old coop too so our plans expanded, we would go from owning 1 coop stocked with 2 hens so 2 coops with a combined total of 5 hens. The pre-existing Crispy plus 3 ex-batts meant we only had to buy 1 extra hen.
Sunday dawned cold and sunny and our day of avian runaround began.
Feathers was taken to her retirement home, namely a work mate of Adam's who adopts waif and stray birds from bantams to barn owls. He agreed to make a chicken sized space for Feathers who will no doubt thinks she's suddenly grown a foot overnight after being introduced to the bantams.
Next we sped off to collect the ex-batts. I've never seen one before so was a bit shocked, not at the lack of feathers so much, but their wilty combs and anaemic appearance. The lady who'd rescued them told me they actually had more feathers than most ex-batts so I think I'd expected them to be a bit more conventional looking.
Back home, we had a minor escapage during our complicated re-cooping schedule which resulted in Crispy and the ex-batts coming beak to beak a bit sooner than planned and, completely unexpectedly, Crispy turned into Rambo Hen. Making a growling noise I've never heard before, she launched herself ruthlessly at a hapless ex-batt, stamping on her neck and pecking viciously at her head. Naturally, we quickly separated them so we now have the 3 ex-batts in the new coop and Crispy the Bully is on her own in the old coop. She won't be alone for long as I'm getting her a brand new point of lay playmate tomorrow, I'm hoping that if we follow conventional rules, introduce the new hen after Crispy has gone to bed and get a newby that bears a passing resemblance to Feathers, Crispy will accept her a bit more readily.
Meanwhile, the ex-batts have been named. They're Spark, Katie (after the singer in the Ting Tings) and Lady Gaga (believe me, not my choice, but I suppose she's wearing about as many feathers as Lady Gaga wears clothes) and they seem really happy. They've made themselves at home and are really curious about us, coming out to line up and stare out at us from the run every time we come out of the house. And the icing on the cake (not literally) this morning, less than 24hrs after arriving, all 3 had laid an egg!
So hurrah for the Bash Street Hens, although they do have really long claws, does anyone have any experience of trimming chicken claws? Is it easy to do?
Posted by Tracey at 14:12