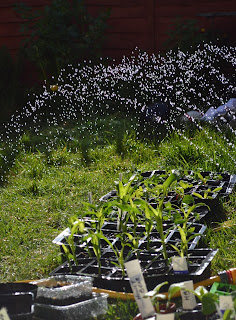 Let's talk sweetcorn. Am I just rubbish at growing it or is it a somewhat testy diva of a vegetable that swoons when the conditions are anything less than perfect?
Last year I started the seeds off at home, outside in small pots. I reasoned that they'd grow already accustomed to the ambient conditions and I wouldn't have to bother hardening them off. This meant that they were outside during the late frost we had at the end of April last year, still tucked up under the potting compost in my sheltered, relatively frost free garden though, so not catastrophic. However, I do wonder whether this may have stunted them in later life.
I found that, at every stage of the growing process, I seemed to lose a proportion of the plants/ears of corn. About half of the seeds actually germinated and their progress was slooooooow, about 3 weeks from sowing to green shoots. Of the germinated seeds probably one third failed to thrive and didn't produce any corn. Of the plants that actually grew, about half produced decent corn and the other half produced weird nearly naked cobs. I think in the end we only had 6 or 8 decent decent cobs of corn from 20 plants.
This year I decided to buy a bigger cold frame so that I had the room to start off all my seeds under cover and get a head start. The sweetcorn has germinated within days but still, half the seeds have failed (in stark contrast to everything else which, other than the disappointing Mr Stripy tomatoes, has a success rate of almost 100%). I can also see huge disparities in size between the plants, a few are large, vigorous and obviously healthy (as seen in the photo, mid sprinkler session this afternoon) but a handful are rather runty. The pattern of last year seems to be repeating itself already.
So - what's your experience? Is my allotment fundamentally unsuited to sweetcorn, or is this fairly typical? I'd love to hear your stories and tips.
Posted by Tracey at 18:57

Email ThisBlogThis!Share to TwitterShare to FacebookShare to Pinterest
Labels: sweetcorn