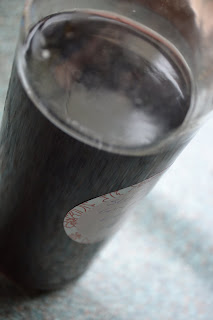 Last year we picked some sloes after the first frosts for the first time I think I've covered the theory behind this before, but I'll precis it for newer readers anyway.
Popular wisdom says that frost make the sloes sweeter or it breaks down their skin a little, allowing the juices to flow out more easily, either way, the upshot is supposed to be sloe gin with a rather more mellow and complex flavour.
When we first started making sloe gin I had trouble picking post frost sloes as, by the time the frosts came, the sloes had withered on the vine (so to speak) I put this down to global warming and the frosts getting later. But, as we all know, the last couple of winters have seen an altered gulf stream and a preponderance of ice and snow. As a result, 2010 presented us with our first opportunity to grab some frosted sloes before they shrivelled.
It's spent 3 months macerating in the demi-jon and a further 4 months maturing in the bottle so it was with a flourish that we finally opened it.
I don't know what other sloe gin aficionados find, but I think the taste of sloe gin can vary batch to batch anyway, the amount of ginny tang and tannins can change considerably and there are so many variables (how long the gin is left to macerate/mature, how the sloes were pricked, differences between locations of the trees they grew on, whether bullaces have crept in etc etc) it hard to pinpoint which one is responsible.
However, this batch is definitely one of the best we've produced, noticeably thicker and mellower than the non frost batch. Whether that's down to the frosting alone is impossible to tell but I think we'll carry on making it when we get the opportunity, just to be sure!
Talking of bullace - has anyone heard of Essex Bullace? A friend of Adam's reckons he's picked some but when we Googled it we only found references to them on American sites along with Royal Bullace and White Bullace, none of which I've ever heard of, can anyone shed any light?
Posted by Tracey at 11:14