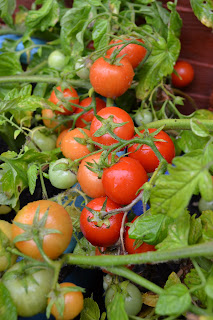 Needless to say, after my last post I've been busy in the kitchen trying to wrangle a few gluts.

First up were the courgettes, the best use for them so far must surely be the Courgette Brownie recipe I picked up from Mumsnet. I used 100% courgettes instead of half courgettes and half carrots and chocolate chips instead of nuts (This is a bit like Theseus' paradox, if you change the ingredients is it still the same recipe?). There was a cloak and dagger element to the preparation as I couldn't let the children know there were (gasp!) vegetables in them. My deception paid off and the girls adored the dark, moist, indulgent tasting brownies and I could polish my good mum halo as they chomped down the courgettes.

Next were my bounteous crop of tomatoes. My whole reason for growing lots of toms this year was to repeat the Ketchup I made last year. Incidentally, I was out attempting to pick some wild apples for the recipe and, to my horror, discovered many local trees completely bare. Is anyone else finding the same? I'm wondering if the dry spring had something to do with it. I may even be driven to the extremes of paying for cooking apples for goodness sake.

Finally, I used my plums to make Plum and Lavender jam after being inspired to try the maceration technique by drroothair's comment on my Yellow Bullace Jam post. It took ages to stone the fruit but once that drudgery was out of the way it's a lovely way to make jam although I have to admit I went for the 'just boil it all up' method rather than fiddling about removing bits and then re-adding them. I couldn't taste the lavender in the final product at all but luckily, it didn't set first time so I re-boiled it and added some mixed spice which produced a lovely, tangy jam I was very pleased with. Hmmm, Theseus raises his head again, if you change the spices and the technique .....

Now, breakfast time, I'm off to pick some tomatoes for fresh tomatoes on toast - it's a hard life!
Posted by Tracey at 08:04