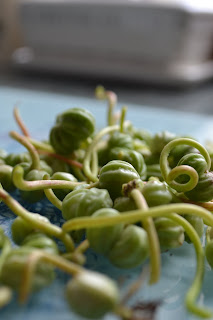 Nasturtiums have a special place in my affections. My food growing odyssey started with a packet of Nasturtium seeds in the back yard of a northern terraced house.
The house had an extension which occupied 80% of the original yard, leaving us with a tiny paved square bordered on all sides by walls at least 6 feet high. On sunny days we'd dash out with our plastic chairs to sit in the single shaft of sunlight which managed to peer over the walls for 15 mins at mid-day. At least the brevity of the sunbathing meant we didn't have long enough to be over powered by the stench of the bins stored out there.
In 1999 I watched Escape to River Cottage. Somehow or other, the disparity between Hugh's reality and my own didn't sink in. Instead, I eyed the small concrete planter built at the base of the wall by a previous tenant and thought I could get me a piece of the rural idyll. I planted Nasturtiums and wild rocket.
I can't say it was a roaring success. As I'd planted the only greenery for miles around, every single creature, winged and 4 footed was magnetically attracted to it. The Nasturtiums were rapidly covered in blackfly so I planted marigolds to attract the lacewings and therefore the ladybirds. Literally overnight half a dozen marigold plants were reduced to stalks by the monstrous turd-slugs, still the biggest slugs I've ever seen and big enough to make me fear for my limbs if I stayed still for too long out there. On the plus side, the neighbourhood cats seemed to appreciate the thoughtful toilet facilities I'd laid on for them. I really should have added cologne and a gilt dish for tips.
It didn't take much to distract me from the disastrous concrete planter. Life moved on and I moved out, the grow my own dream was neglected for almost a decade until I moved to Norfolk and acquired a small garden. When we got our first allotment last year, one of the first things I planted was the Nasturtiums. Just 'cos I can.
This year I've tried Nasturtium Seed Capers for the first time. I used Pam Corbain's recipe but the basic method is to soak the green (not yellowed or pinky) seed pods in brine for 24 hours then pack into a sterilised jar and cover with vinegar. Leave to mature for a few weeks before using. No idea what they taste like - I'll let you know when I find out!
Posted by Tracey at 07:46