A wizened husk can be a beautiful thing. 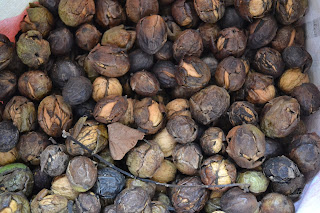 I have to admit I was relieved when the hot weather broke. There was something downright spooky about winter sun of that temperature, even the quality of the light wasn't right. I was resentful about digging the suncream out again (parents required to slather wriggly offspring in Factor 50 as thick as marj will know where I'm coming from) my hayfever kicked off again and the sloes were shriveled like raisins by the time we got around to picking them.
On the plus side though, it's been utterly fabulous for the walnut crop. Normally when they fall they're still wearing their fat, wet green jackets which stain the hands mercilessly and can be difficult to pick off. Then they need to be dried out in order to remove the bitter 'wet walnut' taste and to preserve them. This year though, they're falling in a remarkably dessicated state. The green covering is dry and brittle which means it rubs off easily and cleanly, even better, the nuts are sun dried to perfection. The few I broke open have just the right crisp texture and that funny membrane that divides the two halves of the nut (can't remember the correct name) snaps cleanly in two which is a sign they've dried correctly.
It's hugely labour saving, walnuts are normally a bit of a pain to dry out and we end up with sacks of them all round the house, spread out in front of the radiators to try and speed the process up. This time it's just taken an hour or so to rub the skins off and that's it. As a result we're being ruthlessly efficient, going out early in the morning after every windy night to fill another bag. Knowing the pigs will be eating the excess assauges my guilt twinges. I wonder how a diet of windfall apples and walnuts will affect the taste of our pork?
Posted by Tracey at 13:22

Email ThisBlogThis!Share to TwitterShare to FacebookShare to Pinterest
Labels: walnuts