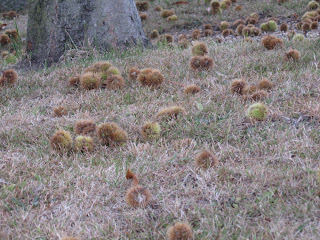 Last year was our first chestnut forage, and quite a successful one it was too. We found plenty of sweet chestnut tress growing locally but we had that age old nut gathering problem - squirrels. The first tree we tried was actually being raided by the furry critters as we approached, they scattered when they heard us, leaving half eaten chestnuts in their wake. Unsurprisingly we didn't find any in that location. After another couple of false starts we finally found one the squirrels had left alone and we got a nice big bagful of chestnuts (top tip: big boots and thick gloves), in fact, I think there are still a handful in the freezer.

I wasn't expecting the 2009 season to start just yet, if memory serves, I think it was November last year when we collected them, so it was a bit of a shock to the system when a few days ago we drove past a sweet chestnut with huge piles of fallen nuts all around it. Obviously I was keen not to miss out this year and yesterday I took myself off to the scene of our 2008 triumph - only to be bitterly disappointed.

Last year we noticed that most of the spiky outer husks contained 2 nuts, one big and fat, the other tiny and shrivelled. This year I was dismayed to discover each husk contained 3 tiny shrivelled nuts, none of them big or developed enough to be worth eating. A few weeks ago I ran past the squirrel infested tree of 2008 and paused to skive, I mean check on the progress of the chestnuts, at that point I noticed the husks were looking smaller than I remembered but thought it was my memory playing tricks on me. I'm now wondering if that location is similarly affected though it'll be a few days before I can get over there to check.

I'd be interested to hear from anyone else with more chestnut experience than me, I'd love to know what may have caused the multiple, underdeveloped nuts, is it just my tree? Has anyone else had this experience this year? Is it the weather we've had?? All opinions gratefully received.
Posted by Tracey at 16:41