Winter Preparations for the Garden. 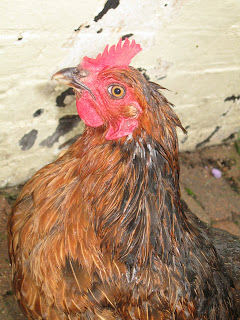 Ugh, it's definitely winter. Poor old chooks are feeling very disgruntled. Digby is pictured listing her demands for winter which, judging by her expression, I'm guessing include a wood burner in the coop and some cosy slippers. Feathers has responded in a slightly more despondent fashion and has commenced moulting once more. I don't think this is the smartest move at the onset of winter but I'm not sure there's much I can do about it. I do feel sorry for her though, with her little baldy head getting all wet.

I have taken pity of them to a certain extent and bought 2m of clear polythene from the garden centre and pinned it over the run to shelter them from the worst of the weather. Sadly, the hemcore on the floor of the run has been well and truely soaked with today's persistent rain so that will need to be cleared out for maximum avian comfort (woodburners aside).

The borlotti beans are more than ready to harvest so once the rain stops I'll get that done which just leaves the Jerusalem artichokes in the ground. My plan is to chop the artichoke stems down as they seem to be dieing back but I'll leave the chokes in the ground and just dig them up as needed. Last year I seem to remember scraping snow of the ground in my efforts to get at them.

I'm enjoying my mizuna crop which tastes something akin to rocket. I've planted the mini greenhouse with winter salad, pak choi and tatsoi, all of which seem to be flourishing for the time being. I've also replanted the Grand Radish Project of 2009. Older readers may remember my initial radish crop was decimated by caterpillars while we were on holiday in August. The winter radishes have sprouted and need thinning, I'm not sure how long they'll survive, they were sown in a fit of optimism when we were having a warm September so fingers crossed.

Next on the list is getting to grips with the bokashi compost system and rejuvenating the soil over winter.
Posted by Tracey at 15:52