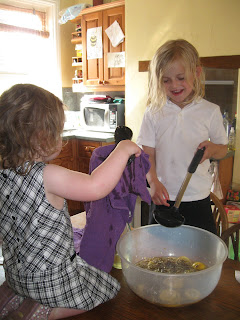 Here are my two daughters, busy making elderflower cordial back in May. I hope that one day (once that teenage thing is out of the way) they'll look back fondly on their days in the kitchen with me and maybe even make cordial with their children too.

I've often wondered where I get my interest in food culture from. I'd love to be able to say that I learned how to make chutney at my Grandmother's knee or that my Grandad taught me how to manage a veg patch ... but I really can't. My family food history is one of astonishingly peculiar quirks of the palate.

My Mum's Mum was wildy eccentric in her cooking, baked beans were fried in lard and pork pies were served plonked in a bowl of Heinz soup. My Mum inherited many of her culinary tricks, my childhood favourite was 'chips wi' soup over' which was a plate of chips with Heinz vegetable soup poured over them - beef soup would have made more sense, more akin to gravy I guess, but vegetable is bewilderingly leftfield.

Dad's side of the family weren't much better. His Grandad used to drink his tea with (brace yourself) a raw egg whisked into it. To be fair to Dad's Mum, she did teach me a few things, like making gravy from scratch. That sounds terribly promising but believe me it's all in the execution, yes it had scrapings from the roasting tin, yes it had vegetable cooking water but it also contained a staggering amount of gravy browning and so much cornflour that the final product could be considered a non Newtonian liquid - you wouldn't have to fill a swimming pool with it to know it could be walked on.

She did teach me how to rub flour and fat together and how to make Potato Cakes but then she went on to teach me how to make a Sunday roast, including reducing the veg to mush (if you want to know, you boil them for half a day then take a potato masher to them to beat out any remaining texture. This is a versatile technique which works for any vegetable), how to reduce the beef to matchsticks of charcoal and how to finish the roasties in the chip pan. And did anyone else's grandparents insist on putting sliced cucumber in a small dish of malt vinegar all morning before adding it to salad?

The funny thing is, as a child I loved all this food, soggy cabbage with salty gravy and crispy potatoes - mmmmm. I still love Potato Cakes smothered in butter and the smell of them cooking under the grill takes me right back to my Nan's kitchen and writing this is making wonder if I have any soup in the cupboard.

There have been successive 'Nan Bennett's, it's not a mere name but a title passed down from matriarch to matriarch. I'm not sure I'll ever adopt it, they are rather daunting shoes to fill. I never met the original Nan Bennett (My Great Grandmother on my Dad's side) but I've heard she was an amazing cook, a great one for high tea and a prolific baker. I wish I knew more about her and had been able to spend time in her kitchen or read her notebooks but I never have. Maybe the cooking gene is recessive, skips the odd generation but remains lurking in the background, waiting to make it's presence felt once more.
Posted by Tracey at 12:00