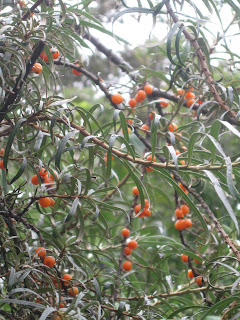 Waaaah! What a day (that's sarcasm by the way). We were over in Great Yarmouth visiting the in-laws and decided to take the opportunity to harvest some Sea BuckThorn berries. Hugh Fearnley Whittingstall made Sea BuckThorn Jelly on River Cottage a couple of years ago. Last year we realised that the bushes with silver grey leaves and vivid orange berries which are numerous in the Great Yarmouth area were your actual Sea BuckThorn. Sadly we were a bit too late and the berries had started to shrivel so I added it to my 2010 wish list and patiently waited a whole year to try again.
This afternoon we dutifully pitched up, ice cream tubs in hand, and though the bushes weren't quite as laden with berries as they were last year, there was still a respectable amount so we thought 500g would be a cinch.
Well you know what thought did (as my old Nan used to say)
Picking them is devilish tricky. Hugh warns about the thorns but we didn't find them too much of a problem, the real issue is the fragile nature of the tiny, blackcurrant sized berries. They don't hang in long stalked clusters like elderberries, each little orange orb has a short stalk which seems to be attached directly to a main branch and the slightest pressure causes them to explode at an astonishing velocity. One I popped at waist height splattered orange juice right over my shoulder.
It became obvious very early on that this was going to be a lengthy task and we quickly asked ourselves if it was worth the effort. We tasted a few berries and the refreshing, fragrant, astringent taste was intriguing enough for us to press on.
I'd guess at least 25% of those we picked popped on contact. Very slow, careful, gentle picking for about an hour barely yielded 100g of berries. When the juice had smothered our hands and found it's stinging way into every tiny break in the skin we'd previously failed to notice, we gave up. Regular readers will know I expect to weigh my hauls in stones, not grams, so I was not terribly pleased. Still, I hoped we had enough for me to make a small, half pint jelly.
Back home I got to work. I simmered the berries in a little water til they were soft and then passed them through a sieve, added Cointreau and sugar to counterbalance the astringency and tasted.
Hmm.
Rather disappointing if the truth be told. I was rather heavy handed with both the alcohol and the sugar and the resulting juice seemed to taste merely of sweet oranges. I pressed on with the gelatine and made 2 small glass bowls of fairly insipid orange jelly.
So that was worth the effort then.
Still, at least a took a few nice photos for the blog while we were out there, let's take a look. Nope, that's one's blurred (don't you just hate it when they look fine on the camera screen but the unforgiving laptop screen shows up every shake) and that one, and that one. In fact, the only usable one is the one you're looking at up there.
So that's it, I think I should call it a day before I cock something else up. Time to snuggle up on the sofa with a nice glass of red to sooth my rattled culinary ego. Except there's none in the house and now it's 5.20pm on Sunday which, in this part of Norfolk, means that all alcohol buying options shut over an hour ago.
*sob*
# Update. The jelly was actually really good in the end!
Posted by Tracey at 16:49