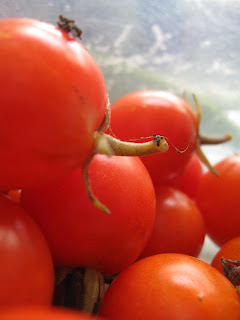 The hanging basket tumbling toms had shrivelled to twigs and the Gardener's Delight in the mini greenhouse were suffering from the attentions of next door's cat (which is a whole other post ....) so I decided to chop them down and harvest the remaining fruit. The green tomatoes went into Green Tomato chutney along with the chillis from Willow's chilli plant. It's too hot for me but Adam will appreciate it I think.
I used the ripe fruit for Tomato Ketchup. I've made plum and hawthorn ketchup before but never tomato. I was a bit apprehensive because the other ketchups don't have a precedent whereas the comparison inviting spectre of Heinz looms large over this one. I thought it would probably be infinitely preferable to an adult palate but the children are an entirely different matter. I used a Marguerite Patten recipe although she doesn't specify a spice mixture, that bit's my own.
Tomato Ketchup
450ml white malt vinegar
2tbs black peppercorns
1tbs szechuan pepper
1tbs coriander seed
1.8k ripe tomatoes roughly chopped
225g onions finely chopped
350g chopped cooking apples (peeled and cored weight)
450g sugar
salt to taste
First boil the spices in vinegar, then leave them to steep for 15 mins or so before removing them from the vinegar. Put the vegetables in a heavy bottomed pan and simmer until very soft. Rub through a sieve to remove the tomato seeds/skins etc, return the pulp to a clean pan, add the vinegar, sugar and salt and simmer until thickened.
I'm not really sure of the keeping properties of this ketchup but as the original recipe recommends bottling it, it's safe to assume it doesn't have a long shelf life. This recipe made 2 bottles for me, 1 of which I put in the fridge, the other (in a plastic bottle) I put into the freezer.
I love, love, love this ketchup and had to be restrained from guzzling it neat like soup. It has a really bright, zingy fresh tomato flavour that's a smack in the chops after the plastic gloop of commercial ketchup. The only drawback is that it's very thin and runny compared to what we're used to but I can live with that. Luckily, Willow agrees with me. I invited her to test it, she approached the spoon with caution but her little face lit up when she tasted it. The smugness ended with Xanthe though who refused to taste it and made sick noises - oh the joys of cooking for small children *sigh*
Posted by Tracey at 06:54