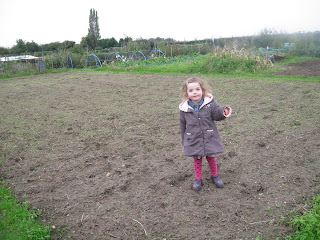 This time last year I was mainly concerned with how to maximise the vegetable harvest from my tiny back yard while quietly fuming about the lack of progress with the planned new allotment site.
Now I find myself in possession of not one but two allotments.
Yep, you read it right, I've taken on a second plot. Not on our current site at Bressingham but on the Diss allotment site which is just behind my house. It's always been a very popular site with long waiting lists and I had assumed it would take years to get a plot there so, although it's the closest to my house, I'd mentally written it off.
But back at Bressingham, as regular readers will probably know, we've had yet another kerfuffle. After the initial kerfuffle between the allotment holders, a house neighbouring the site has taken against the concept of allotments per se and has commenced a further kerfuffle - this one involving fly tipping, vandalism and raising formal complaints about children on the allotments. To be honest, this, taken with the well established perennial weeds, lack of water supply, muddy driveway which is unusable after rain, the 5 mile round trip every visit and the wonky decision making of the Parish Council has tipped me over the edge.
I called the Diss allotment site and asked to go on their waiting list which turned out to be all of 24hrs in length. Last night I got a call offering us the plot. I expressed surprise at the speed of the offer and was told it's all thanks to Bressingham, apparently we've absorbed the waiting lists from Diss and Roydon so there are vacant plots on those sites for the first time in years.
Today, I went to sign up. Even walking at a 3 year old's pace it only took 4 minutes to get there. Upon arrival, the clouds parted, a shaft of sunlight lit our way and the air was riven with angels singing. The driveway is hardcored, there is mains water on tap, the plot is clear with no weeds, the soil is fine crumbed and not the heavy clay we have at Bressingham. It's like sliding into a warm bath of allotmenteering. Ahhhhh .......
So now the question is, what do we do with Bressingham? We have a contract til March, so don't have to decide just yet but our two options seem to be:
Keep it. Plant it with low maintenance stuff like fruit trees/bushes so we don't have to go very often and keep Diss for the veg which will need lots of watering/care.
Hand it back. But what would we do with our shed, fence and newly planted fruit trees - none of which are allowed at Diss and none of which we have room for at home.
I'm leaning towards the former, but will having 2 plots on different sites be a pain in the rear?
What do you think? I'd love to hear your views.
Posted by Tracey at 20:25