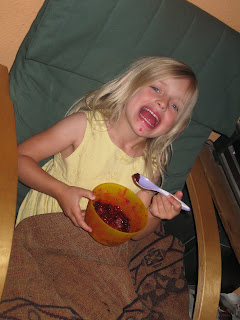 I totally forgot to take a photo of the crumble before it got snaffled up so I had to quickly catch Willow finishing off the last bit, here's my eldest daughter cheesin' it up for the camera!

I'm afraid I've been a bit rubbish on the weights and measures so I hope you can make sense of my ramblings. I think I put about 10oz elderberries in a pan with about a 1lb of de-stoned plums. I added just a smidge of water plus a pinch of ground cloves and a generous shake of cinnamon together with about a cupful of brown sugar. I simmered this together til the fruit was tender. I'd recommend tasting at this point and adjusting the sugar to taste.

I made a crumble topping consisting of 100g ground nuts, (I used hazlenuts and almonds because that's what I had in the cupboard. The hazlenuts were the magic ingredient, in my humble opinion.) 200g flour and 100g butter, rubbed together then mixed with 100g brown sugar. The crumble was then baked at gm5 for 20 mins or so. We ate it with vanilla ice cream.

I've never had elderberries before and was stunned at how strong the flavour is. By pure accident I think I put the upper limit of what would be acceptable in there, any more would be quite overwhelming but as it was, the crumble was wildly popular in this household.

I still have a huge boxful of elderberries in the kitchen which I'm not sure how I'm going to use up although I have seen a recipe for pear and elderberry jam. Hmmm.
Posted by Tracey at 19:02