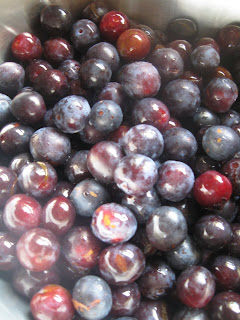 It's a minefield! I've been tying myself up in knots about it of late.

I think it's fairly obvious that most foragers keep the location of treasured finds to themselves. There's always the risk that if you tell one person, they tell one more, who tells one more and before you know it the tree is stripped bare. It's always a bit of a heartsink when you arrive at a favourite tree and spy trampled nettles around the base, you can be sure that all the ripe fruit at person height will have gone.

Then there's the issue of how much to take. A treeful of anything is way more than any household could reasonably claim to 'need' and as these trees are wild and not owned (as a crop) by anyone I feel morally obliged to leave some fruit for future foragers but at the same time it's such a shame to see fruit go to waste.

I have to admit Adam and I stripped the cherry plums and yellow bullace pretty ruthlessly but, in our defence, they were rotting off the tree and lying in great piles in the road so it was pretty clear no-one else was interested in them. The grabby thing gives us an advantage too. I spotted a lone damson shrub while I was out running, but by the time I went to pick some the tree had the characteristic ring of trampled nettles and was stripped bare to about 6' but trusty grabby thing meant I still got a small bagful from the uppermost branches.

On the damson front, Rachel well and truly saved the day (again!) Until I spotted that lone shrub this year, I hadn't found any damsons locally. Despite hearing various people casually drop damson jam and gin into conversation, I always restrained myself from asking outright where they picked from as I feared breaking the 'forager's code' on locations (see above) and if I'm brutally honest I'd hate to be asked outright where my favourite stuff grows. But I finally threw caution to the wind and asked on Facebook if anyone knew where the 'damson groves of Diss' were located. Rachel was the only person to step out of the shadows and told me about a hedgerow full of damsons which is on private land but she had permission to pick some fruit.

I still felt terribly guilty while I was picking them, waiting for a heavy hand on my shoulder at any moment to challenge my presence - I had my garbled story all worked out "It's ok mister, my mate said it was ok, honest" and if all else failed, I'd resort to bribery with damson jam! I was careful not to take too much, mindful that both Rachel and the hedge's owners would want their 'cut' too, though to be fair, there were flippin' tons of them, can't imagine anyone going short this year.

Anyway, I have a plan to assuage my guilt somewhat. (s'cuse me while I turn up the collar on my trenchcoat and tip my fedora over my eyes) Rachel, if you're reading and you like membrillo, drop me a line, I have some information that could be very useful to you ......
Posted by Tracey at 18:00