Foraging as a Spectator Sport. 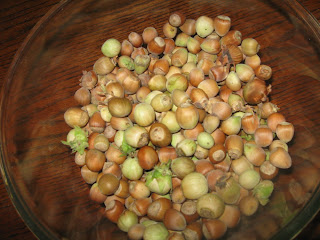 In the main we forage alone. We frequently see signs of other human activity, the rings of trampled nettles and absence of ripe fruit at person height for example. Occasionally we get actual human contact in the form of comments from passers by, sometimes we get as far a companionable little chat about what we're picking and what we'll make. There was even one unpleasant incident involving a farmer ordering us off a public bridleway on his land because we were picking sloes. But today's experience was quite unique!

In the morning we decided to take the children to Bressingham Steam Museum, next to the cafe was a cherry plum tree and huge great drifts of ripe plums all over the floor. Willow and Xanthe spotted them and mithered mercilessly til we agreed to pick a small handful after lunch. Once we started picking the floodgates opened, it was like a signal that this is socially acceptable behaviour and other people joined in, filling pockets and laps with little red plums, some were furtive, some triumphant but it was quite satisfying to see the ripple effect we had.

On the way home we stopped by a small group of hazlenut trees which are miraculously untouched by squirrels, I assume because they're surrounded by roads on all sides. The nuts are ripening already and were falling to the floor, we began picking them up and were soon absorbed in the task. Suddenly we were startled by a voice shouting "What are you scrumping?" I looked up and see a young couple walking towards us, "hazlenuts" explained Adam "Oh great!" said the chap who strode over and began plucking nuts from the tree with gusto.

It was a slightly strange situation as obviously we're in no position to be territorial although I have to admit my gut reaction (which I didn't act upon!) was to say "Bog off! We were here first!" but on the other hand, it's nice to meet people with similar interests and good that perfectly edible nuts aren't going to waste.

Luckily enough they were more interested in the green filberts still on the tree while we concentrated on the riper nuts on the floor and with the squirrels out of the way, there were more than enough to go around.

It's still early in the season so we'll visit again in a week or two and see if any more have fallen. At least nuts keep well so I don't have another batch of jam making to worry about though I do have to figure out where to store them so that they dry out nicely and keep well.
Posted by Tracey at 10:20

Email ThisBlogThis!Share to TwitterShare to FacebookShare to Pinterest
Labels: Hazlenuts