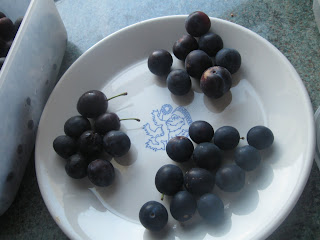 Pop Quiz - what have I picked?? On the left are some damsons I picked a few days ago, they're very ripe and sweet and a deep purple colour. At the bottom are a few purple bullace I picked. They look almost identical but the taste couldn't be more different. It's beyond sharp, I would defy anyone to taste these without a major physical reaction including face scrunching, foot stamping and immediate demands for water as they seem to leech every drop of moisture from your mouth.

The fruit on the top right now look the same as the others but when I saw them on the hedge they were bright blue, covered in a pale blue bloom which makes them look like giant sloes. When tasted they were sharper than the first damsons I picked but not in the same league as the bullace so they're obviously just slightly less ripe than the first batch.

Now, shall I throw sloes into the confusion? Some purple bullace are quite small and very easily confused with sloes (see the excellent sloe.biz site for a more detailed discussion) but there is a foolproof way to tell the difference. Sloes grow on the Blackthorn tree, the clue's in the name, if you can pick them without getting scratched they're bullace, if your flesh is ripped to shreds on vicious thorns, they're sloes.

It can be really tricky to identify wild plums as many of them are inter-related. According to Richard Mabey's seminal work 'Food for Free' damsons were bred from bullace so the two fruits can be indistinguishable. While I'm on the subject of Richard Mabey, he lives near Diss, I saw him in our Morrisons once. Felt inexplicably cheated, shouldn't he be out foraging ducks off the Waveney or something? His book also ignores Cherry plums and yellow bullace (far sweeter than the purple kind) and I really don't know why.

To muddy the waters further, there are cultivated varieties of plums which escape from gardens. I know where a wild plum tree grows whose fruit is delicious but I haven't got a clue what type they are. They're larger than damsons but don't have their characteristic blue bloom and aren't as large as something like a Victoria plum so goodness knows what they are.

Which begs the ultimate question - if they taste good, does it matter?

Edit - I'm just updating this post with a couple of extra pointers in distinguishing sloes and purples bullace. I'm noticing bullace are ripening much earlier than sloes, I'm writing this edit at the beginning of September and bullace are dropping from the trees and even beginning to wither already. Sloes traditionally aren't ripe til after the first frost.

Also, I've noticed insects burrowing into bullace whereas this doesn't really happen with sloes as they're not sweet enough. Tell tale signs of maggots include crystalised drops of juice (if you look closely enough you'll see it comes from a tiny hole) and little piles of tiny brown grains (maggot poo - ugh) on the outside of the fruit.
Posted by Tracey at 08:13