Right, that's IT - the moulis goes in the bin! 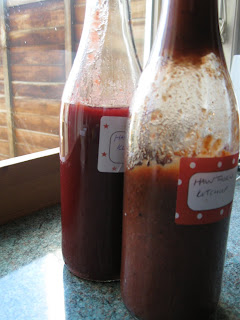 Flippin' thing. For one, it's massive and takes up more room in the cupboard than a baby elephant would. For two it's a pain in the rear to dismantle and wash, impossible to do without smearing pureed food all over my hands and top. But most importantly, for three, the holes are too big (even the smallest ones), they allow 'debris' through into the puree, discolouring it.

I suspected this was the cause of my rather orangey membrillo but yesterday I made my second batch of hawthorn ketchup and my suspicions were confirmed. I made the first batch using the moulis but decided to stick to the sieve and spoon method for batch two and just look at the colour difference. Batch two (at the rear) is bright, zingy, clear scarlet while batch one (infront) is a listless speckled orange. Not only that but the sieve and spoon were actually quicker and didn't wrench my shoulder like the moulis did first time round. So that's it, the moulis is confined to the kitchen appliance graveyard a.k.a the garage.

While I'm on the subject of home made ketchups, last night's dinner was a huge success. I decided to try a version of Hunter's Chicken using the cherry plum ketchup I made. I wrapped chicken breasts in bacon, parcelled them up in foil and baked at GM 4 for half an hour, then I opened up the foil, sprinkled over crumbled stilton and put them back in the oven for another 15 minutes. Once safely on the plate I poured a generous amount of plum ketchup over them. Simple and tasty, even the children enjoyed it.

I'm surprised to discover I didn't blog the plum ketchup recipe so here it is, just on the off chance anyone's got plums in the freezer to use up:

Put everything except the soy sauce into a pan and simmer for about 30 mins til the plums have broken down. Remove the star anise. Puree until smooth and then pass through a sieve into a large pan. Add the soy sauce and simmer until reduced and thick. Pour into sterilised bottles.

Allow to mellow for a couple of days before using, will last 2 or 3 months unopened in a cool, dark place. Once opened, keep in the fridge.

My Radio Norfolk debut! My bit starts at 1hr 3mins.
Posted by Tracey at 12:15