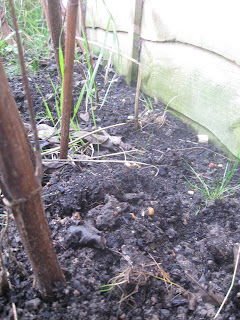 1st December, how did that happen? Had to scrape ice off the windscreen for the first time today. I finally got around to 'closing down' the garden for the winter, not sure why I procrastinated about it for so long, it only took about 20 minutes in the end. All the old/dead plants have been dug up and one border dug over, I've left the other as it's still full of Jerusalem Artichokes. I pulled up the radishes that were of any size in case the frost damages them and I've brought the fairy houses in from the fairy garden for the same reason.

As I dug I reflected on the successes and disappointments of the season and started to ponder my plan for next year. I've decided my main goal is to maximise yield in relation to space utilised. My peas and beans were nice this year but the crop was disappointingly small. I sowed petit pois, broad beans, runner beans and borlotti beans. Each crop only produced enough for one or two family meals each which wasn't really worth the effort if I'm honest. I might give runner beans a go next year, around the bean frame in the front garden, would it be too optimistic to hope I'll have enough to give salted beans a go??

My main tomato crop was smaller this year than in previous years which was a tad disappointing but thems the breaks I suppose. I'm wondering if there's something else I can grow in the mini greenhouse next summer as a bit of a change though I'm not sure what. The strawberries were also somewhat thin on the ground, they provided a snack every now and then for the children but not enough to sit down to a bowlful each. I think next year I'll give the strawberry hanging baskets over to tumbling tom tomatoes which were a good crop again this year.

Rainbow Chard, Jerusalem Artichokes and Carrots were all great successes which I'll grow again. Crop rotation is a problem in a small garden though, the carrots will need to move but I don't know where to, the only alternative place is the sunny spot I'm keeping for next year's courgettes (which I'll grow in pots and bags to avoid the moasic virus I acquired this season).

Think I need to send off for some seed catalogues and peruse them from under a snuggly blanket armed with some sloe gin. The joys of winter gardening.
Posted by Tracey at 13:36