RIP Sir Digby Chicken Ceasar (a girl, despite the name) 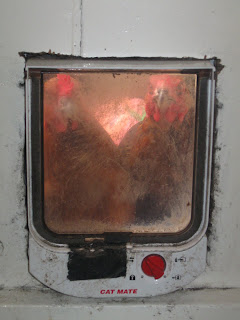 Well, we are now down to one chook as poor old Digby turned up her toes yesterday. I came outside on Thursday and noticed her comb had turned a dramatic shade of purple and was flopping over to one side but she was still hopping around the garden reasonably well. I gave her a handful of mealworms and hoped for the best. In the meantime I looked up a variety of chicken diseases on the internet but I was somewhat puzzled as she didn't seem match any of the listed symptoms. The only plausible suggestion I found was that a purple comb can be a sign of heart problems. Digby has always had a wheezy chest and I think that heart and respiratory problems can be linked so that was my best guess.

When I went out to the coop on Friday morning she had taken a dramatic turn for the worst and, to be frank, it was obvious she wasn't going to last much longer. I made her as comfortable as possible, shut Feathers out of the run to give her some peace and went indoors to break the news to the children.

Willow was surprisingly upset for a child who claims to be scared of chickens but she seemed to come to terms with the situation quite quickly. She came up with the rather sweet idea of making a memorial of some kind to Digby to put in our fairy garden.

Sure enough, by tea time, Digby was no more. Feathers seems to be fine, though she's still rather pale faced followed her moult and she's still not laying but she looks energetic and healthy and her feathers are beginning to re-grow. Just to be on the safe side we'll leave it til after Christmas to get a replacement chicken in case my diagnosis is wrong and Digby had an infectious disease of some sort.

She's pictured with Feathers in happier times this summer, staring through the catflap in that gimlet eyed way she had. She used to peer through the murky plastic til she saw human feet walk past then she'd peck furiously on the catflap, making it flap and bang in an alarming fashion, in the hope of alerting us to her presence and persuading us to feed her marmite toast.