You can't turn your back for a minute in this house. 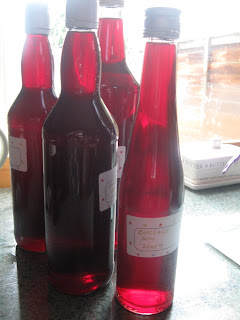 Festive cookery continues apace in The Kitchen this week as the decanting marathon commences. You may remember over the past few months we've been steeping purple bullace gin, sloe gin, damson gin and the experimental damson and elderberry gin. Everything except the sloe gin is ready for the fruit to be removed and to decant into pretty bottles, the liqueurs can be drunk straight away if you're desperate but they will benefit hugely from having a month or three to mature in the bottle.

So today I strained 2 demi johns of bullace gin and 2 more of damson gin which means I'm left with a whole load of boozy fruit to make use of. The damsons I have set aside for now and will make damson gin truffles with them next week (alcohol and chocolate, what's not to like?) and I turned my attention to the ginny purple bullace.

Adam and I opened a bottle of English 'Malt Spirit'. This is from the English Whisky company, it's whisky which hasn't yet matured enough in the oak casks to officially be called Whisky so is still a clear, white spirit. Adam and I weren't terribly impressed with it so I tipped the remainder over some of the used sloes (philistine, I know). I'll leave it a month or so, cross my fingers and hope it tastes ok.

The bulk of the leftover sloes I used to make Sloe Gin Jelly. It's just my original sloe jelly recipe but with alcoholic sloes instead of raw. I also had a small amount (approx a 'shot') of sloe gin left over so I chucked that in there too. It tastes much sweeter than the raw sloe jelly, more akin to the Sloe Jelly with Port I made.

I know the recipe was a success as this evening, Adam, Willow and I were engrossed in a game in the living room. Xanthe scampered in and announced "I like that jam!" - cue general panic about the jars of Sloe Gin Jelly quietly setting in the kitchen. My 2 year old tot had dragged a chair across the kitchen and stood on it to gleefully raid one pot of gently quaking jewel bright jelly. I couldn't exactly be cross, it is a great, fat seal of approval after all.
Posted by Tracey at 20:00