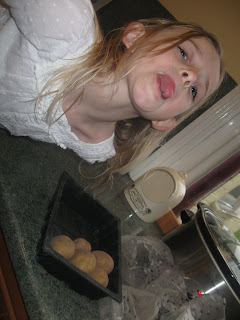 It finally feels like spring is rolling around again with our first step towards this year's veg crop. I've decided to grow summer salad potatoes in bags just underneath my radish skyscraper where we grew leaf salad last year. Willow and I kicked things off by putting out seed potatoes in old plastic trays and leaving them to chit (ie sprout) on the playroom windowsill.

I've been giving some thought to this season's crops. I've decided my twin aims for the garden this year are 1) maximise yield in the space available. This year we had a few crops which only gave us one meal's worth of produce which is rather disappointing given the effort we put in. and 2) I want it to be a nice place to BBQ/drink wine on summer evenings. In the past couple of seasons getting to grips with the veggie thing has been my priority, this year I'd like to tip the balance towards leisure a little more. The biggest spanners in the works are the chickens, who not only poo everywhere but will happily chomp down the veggies meaning our garden is full of barricades to make sure the twain shall never meet, effective, but not pretty.

Back Garden.
Tumbling toms in all 5 hanging baskets. Last year 3 were planted with strawberries but we only had a snacking supply. I may have to move one of the baskets to the front to get a bit more sun.
Jerusalem artichokes unchanged.
Summer salad potatoes as discussed.
Radishes in the skyscraper
Courgettes in large blue pots x 2 plus one grow bag on the soil due to last year's mosaic virus incident
Carrots
Runner beans
Herbs and lollo rosso dotted about in pots
Probably tomatoes in the mini greenhouse again but I may change my mind.

Dwarf peas on the playroom window sill, another tiny crop but the girls enjoyed them last year so we'll do them again as a 'fun' crop.

I've found all the above to be tried and tested glut producers even in our tiny garden. To my mind, there's not much point going to all the effort of nurturing these plants if you're not rewarded with an overwhelming mountain of veg. I've abandoned strawberries, peas, borlotti beans and broad beans. All were lovely but we just don't have enough space to plant the quantities needed for a decent yield. The salad potatoes are new this year (maincrop spuds not worth planting in my humble opinion, seeing as I can get 25kg for £3.99 at Stuston Farm Shop) so it'll be interesting to see how well they do.

As for the 'pretty' aspect, that's more of a challenge! I'm going to start with basic tidying, painting the house, finally getting around to properly replacing the seating which got broken last year and maybe indulging in some statuary that the chickens can't eat - hopefully. 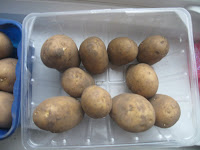