Unveiled at Last: Crispy the Chicken 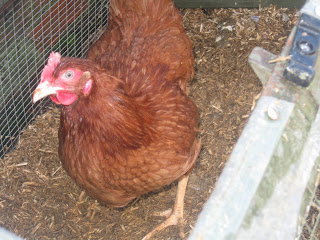 Here she is at last, the latest addition to our postage stamp sized nod towards self sufficiency: Crispy Chicken. After school on Thursday the children and I went over to the Hen House people to choose ourselves a suitable companion for Feathers.

It wasn't quite the idyllic childhood moment I had in mind - but they never are. In the car on the way over Willow decided she wanted a white chicken and sold the idea to Xanthe who embraced it enthusiastically. By the time we got over to the coop of point of lay hens, Willow changed her mind and wanted a little brown hen. Xanthe stubbornly stuck to the white hen idea and tears ensued. I decided to go with brown as I thought a white hen would look grubby quite quickly so Xanthe was allowed to choose the name as recompense - hence 'Crispy'. (don't ask, I've no idea where she got it from)

Back home Crispy was pitched into the coop once Feathers had gone to bed. The theory being that the established hen gets to sleep in her usual roosting position and the new hen has to fit around her. The theory was overturned somewhat when Feathers woke up in a grump and came out to berate the new comer (I think I even saw curlers and a rolling pin if I'm honest) I was quite proud of the terribly British and frostily polite way they settled their roosting differences, every now and then I peered out into the pitch black and listened to silence punctuated by the occasional muffled thump and a testily clucked chicken equivalent of "Excuse me, I think you'll find I was here first! Harumph"

Crispy has been confined to barracks for a couple of days while she adjusts to her new home. She obviously approves of her new surroundings as she starting laying immediately. Today she was allowed out to stretch her legs for the first time. The new coop mates seem to be getting along fine, they're following each other around the garden like, well, umm, birds of a feather I guess. 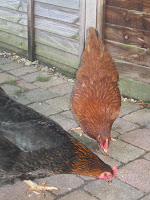