A Self Indulgent Rant about Allotments 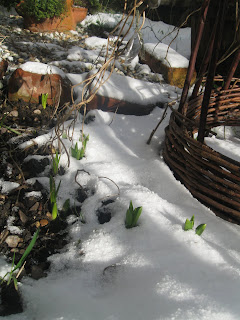 I'm assuming we all know about allotment shortages, more people growing our own veggies, yada, yada so I won't go over old ground (ho ho) in that respect, this is merely a personal howl of frustration to the winds.

It's now been almost a year since I first approached our parish council about their new allotment allocation. They'd acquired some land and were setting up new allotments which would be ready to release to residents 'in about 8 weeks' - let's just say that has turned out to be optimistic. 11 months down the line I'm still waiting. So far as I can tell the land has been cleared of weeds and the council have been waiting for it to be ploughed since about September last year. I have no idea what has caused the delay as the parish clerk seems to have given up communicating with me, my last e-mail garnered a curt, 2 word response. (I've e-mailed about every 2 months to ask how progress has been going so I don't think I've been mithering excessively) So I'm feeling rather hopeless and resigning myself to giving up on the allotment idea.

I've been looking at alternatives in my desperation, namely the Landshare website. In my area all the land offered seems to be a 'garden share' type of arrangement which, I have to admit, I'm wary of. Maybe I'm overly pessimistic but I can see many potential pitfalls. Who decides what is grown? What if a crop your host is particularly looking forward to fails? One ad I saw specified "All we ask is that you keep the veg plot tidy", I fear that is quite a big ask in the middle of summer when the veggies are romping away. Another ad asked for help with maintaining the rest of the garden, I wonder whether that translates as 'unpaid gardener wanted'. Or am I being uncharitable?

Anyhoo, I'd much rather be independent, Queen of my own destiny as it were. If anyone has come up with a solution to growing veggies outside of the standard allotment system, or has made a landshare arrangement work well, I'd love to see your comments!
Posted by Tracey at 10:38