Encounters with our Predecessors. 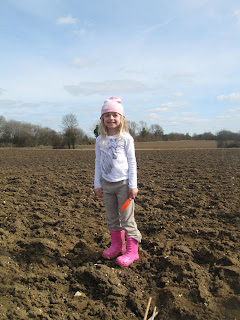 This weekend we started the hard work at the allotment, trampling paths, evening out the bumpy ground, digging in soil improver etc We're all exhausted but happy, it's been a thoroughly enjoyable experience (so far!).

Two other families and their children were also there, it turns out they go to school with Willow so all the children happily ran amok together, kidnapping worms to occupy the worm hotel they built. The weather was glorious and it was a pleasure to spend time in such a beautiful spot while the birds sang (well, apart from the pheasants who sound like a rusty gate)

While digging over my fruit bed I was delighted to uncover two small sections of clay pipe (one is pictured below) These pipes were smoked between about 400 and 150 years ago, they were the cigarettes of their day being almost disposable, designed to be thrown away after a handful of uses. The stems were long and thin and frequently became clogged with spit/smoke deposits so users would bite off an inch or so, throw it away and continue smoking the stub. What I found here is a couple of those bitten off bits of stem.

It's quite amazing to think that one of our predecessors, probably a farm labourer rather than an allotmenteer, stood in this field all those years ago and carelessly tossed his pipe stub away where it lay until yesterday. I also found various shards of cups, one or two modern and one that looks quite coarse and hand made so is probably older. I love this evidence of continuity of use. For how many years have people toiled in this field, paused for a smoke and a cuppa, then carried on. Even yesterday people brought out their china cups and flasks at lunchtime.

It's also thought that many of the fruit trees in our hedgerows are a product of the lunchtime break. Farm workers would sit in the shade of a hedge to eat lunch and then throw their leftover fruit stones/pips/cores into the ditches before resuming work. And many years later, canny foragers came along and enjoyed a free feast, probably ignorant of the helping hands from the past who made it possible. 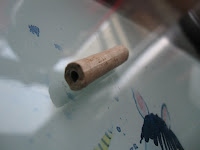