The Garden is Officially open for the 2010 season. 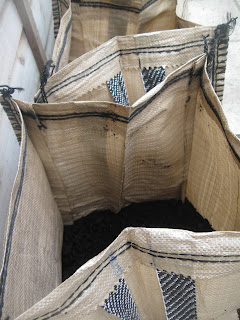 Today was the beginning of the real hard work of 2010. As I'm signing up for the allotment tomorrow I thought I'd make a start on the garden before it gets abandoned in my new found allotment enthusiasm.

Next up was basic tidying, digging grass out of the cracks in the patio, washing the playhouse etc and then started planting. Of course the allotment has thrown my carefully laid plans into disarray, I was unsure whether to go ahead with my 'potatoes in a bag' plan or to plant the spuds on the allotment instead. I eventually decided to stick with the potato bags because it may take a week or two to finalise the allotment plans and in the meantime I want to move the chitting potatoes off the playroom windowsill so that we can plant the dwarf peas on there instead. Also, I think there's a danger of my whole veg growing enterprise becoming paralysed with indecision at this stage so it's important to plough on (s'cuse the pun)

The Radish skyscraper has been re-sown and the pea trough is filled with soil and waiting for the children to get in from school so that we can plant the peas. All in all a very productive day though my muscles seem to have been taken by surprise and are making gentle protest.
Posted by Tracey at 13:38