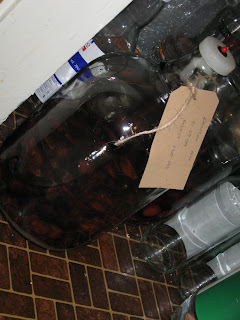 Seeing as I'm up to my eyes in fruit and insects I thought it was time to get my head down and have a marathon 'processing' session.

My first task was damson gin while the kids were in bed last night. I used this recipe from the sloe.biz website. All went well until this morning when I awoke to a small purple puddle in the kitchen - one of my demi johns had cracked and gin had been slowly leaking out all night. Fortunately the other one was fine so all was not lost.

Chop the pears into small dice and put in a pan with about half a cup of water. Simmer for 10 mins. Add the elderberries and cook til soft. Add the lemon juice and sugar, cook on a low heat til the sugar dissolves then increase the heat and boil til setting point is reached.

Apples can be substituted for pears in this recipe.

So, once I've made my plum and marzipan tart for tea tonight the fruit in the house will be back under control, just a bowlful of pears and apples like any other normal household. So naturally tomorrow I'm off damson picking with friends, oh yes, and then there's the 3kg or so of cherry plums still in the freezer (sigh) I'll miss the fun once the fruit season ends though.
Posted by Tracey at 13:06