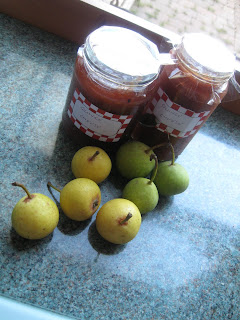 I dunno, Quince Paste, Quince Cheese, neither sounds particularly appetising to me but then 'Membrillo' it's a bit foreign and poncy isn't it? Still, a rose by any other name etc. Personally, I love Membrillo with blue cheese, it's also good as a cake filling as it's thick so doesn't soak into the sponge and stands up quite well.

We're lucky enough to have a Japonica Quince growing wild nearby, we discovered it last year so this is our second season of membrillo and bottled quince though, sadly, it may be our last. The tree grew at a 45 degree angle and this year it's been a victim of it's own success. I described it as 'groaning' with fruit without realising that was literally true, I had a shock last week when I discovered it had fallen flat to the floor. The trunk isn't snapped all the way through so maybe it can survive but my main worry is that it grows on council owned open ground and I have a feeling that elf and safety or tidy mindedness may strike and it'll be chopped right down.

As a result I've gone on a mad quince picking session so I can make the most of (probably) the last season. I'm on my second batch of membrillo. I experimented with the first by adding some allspice, cinnamon and whisky it tastes like Christmas but unfortunately the colour has changed and it looks, quite literally, like jarred mud! My plan is to use it to make some festive jam tarts closer to Christmas with a star shaped lid to disguise the colour and palm them off *cough* I mean generously donate them to the school Fayre.

I then made a second batch in the usual way. For me that means simmering the quince for aaaages until they're pink and soft, then roughly mashing with a potato masher before passing them through a moulis to remove the skins and pips (sick of the sight of that flippin' moulis to tell the truth) I do it this way because the Japonicas are tiny and fiddly to peel and chop, unlike the larger varieties. I put the pulp in my conveniently calibrated jam pan and add an equal volume of sugar. I then boil it til it's very thick and pot up in the usual sterilised jars.

I have to admit though, my Membrillo isn't the most professional you'll ever see. It's a kind of burnt orange colour rather than the glowing, jewel red it should really be. I'm not quite sure why this is, maybe it's the Japonicas or maybe my moulis method.

A true Membrillo should also be capable of being turned out of it's pot and sliced, whereas mine is more of a spoonable consistency, I guess a fruit butter rather than an actual cheese, but this bit is a deliberate decision. Cooking the quince/sugar mixture to the correct thickness is a hazardous, traumatic event involving hot, spitting, boiling sugar flying wildly all around the kitchen, followed by weeks of slowly chipping rock hard splodges of cold Membrillo off floors, walls, cooker tops and ceilings. I decided I could live with spoonable!
Posted by Tracey at 09:15