Last Hurrah of the Veg Patch. 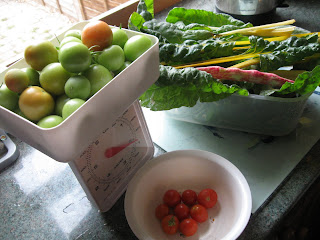 *Sigh* it's that time of year again, using up the drips and dregs from the various harvests. Today I picked the last of the Bens as well as the green tomatoes from the mini greenhouse. (As I type the chickens are running amok in there, hoovering up the baby tomatoes I left behind). The last of the carrots finally came up yesterday and the Swiss Chard is looking sorry for itself under it's coat of silvery mildew.

Tonight we're having our annual Last Resort Supper. That's all the raggle taggle veggies stir fried with chicken and the remnants of last year's plum sauce. At the weekend I'm going to persuade Adam to wrestle that giant spider who's been guarding the run-to-seed basil so that we can dig it up and make pesto.

Still going strong are (of course) the Jerusalem artichokes and the borlotti beans. For some bizarre reason one borlotti bean pod came out all on it's own before all the others and that has ripened, also alone. So I am now the proud owner of 3 borlotti beans. Nature's bounty is a wonderful thing.

I'm going to plant a few winter crops, I've already re-planted the Mizuna after it was decimated by caterpillars and for the first time this year I'm going to plant up the mini greenhouse with salad or stir fry leaves. I'm slightly wary of planting winter crops in the main borders for fear of exhausting the soil. Last year I grew green manure (field beans) after Christmas but found it hard to dig in and rogue beans sprang up among legitimate bean crops causing much confusion, so this year I'm going to try the bokashi system. As I understand it I fill a bin with kitchen scraps and bokashi bran then after a few weeks I can dig the resulting fermenting veg into the soil where it should rot down quickly, ready for spring.

Fingers crossed for an allotment sometime soon, I've been told it's immanent since March so I really hope it's not too much longer - otherwise I'm not sure what I'm going to write about from January to May 2010!
Posted by Tracey at 11:04