Chutney Bread and other adventures. 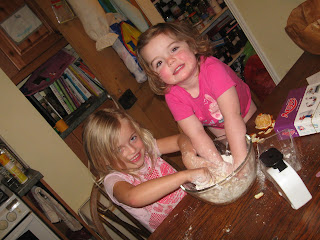 Hmmm. Undecided. I experimented with chutney bread today. I found a recipe for piccalilli bread but it's obviously a heinous crime in this house to be caught with shop bought preserves so I decided to make it with my gooseberry chutney instead. I made it in the breadmaker, standard 2lb loaf with with half and half stoneground, wholemeal flour and normal strong, white bread flour plus 4tbsp chutney. The resulting bread is nice but not obviously chutney bread, if you see what I mean. It has a dark, sweet, chewy flavour vaguely similar to a wholemeal loaf I used to buy made with treacle. I think I'll try it with a stilton ploughman's and a glass of port before passing my final verdict. (by the way, I only recently discovered port, why did no-one tell me it's not like sherry at all?)

Elsewhere in the kitchen I've been teaching Willow and Xanthe to make crumble (pictured) I was sent a bag of quinces by a very kind friend and we made spiced quince crumble (chucked a couple of cloves into the water when simmering the quinces and added ground cinnamon and allspice to the cooked fruit) which was delicious. Since the arrival of half a dead sheep at our house I have the luxury of a chest freezer so as we are already stuffed to the gunnels with preserved quince in numerous forms I decided to just plain old freeze the remainder.

It struck me that I'm actually quite fortunate to have got by with only a small freezer until now. What with necessity being the mother of invention and all that, it's forced me to get creative on the preserve front. If I'd started out with a chest freezer, it would have been very easy to just throw bagfuls of wild fruit in there and just use them as they are but as it is I now have an array of 'new' products like ketchups, cordials and bottled frui to use. Next time I make quince crumble I'm going to add in some of my pears bottled in mulled cider, much more interesting than just plain old poached pear.
Posted by Tracey at 14:28