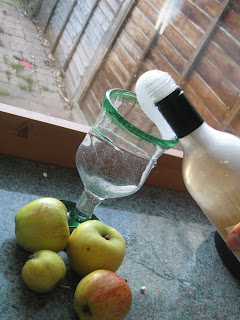 What is it with recession and home brew? Back in the 90's Adam was, apparently, quite prolific on the home brew front. Having not brewed anything for over a decade, this year he decided to use up our supply of wilding apples by making cider and his home brew renaissance seems to have co-incided with another economic downturn. Happily, the increased popularity of home brew at the moment means it's much easier to get hold of supplies. Even our sleepy little Norfolk town now boasts it's own home brew shop.

Apologies for the vagueness of some quantities, this has really been an experimental process!

We started with about 20lbs of apples which was made up of about 80% sharp tasting wildings and 20% full on crab apples. They were sliced roughly and put into a fermenting bin with 5 gallons of water. Adam pounded them with the end of a rolling pin to release as much juice as possible and added 1lb sugar per gallon of liquid. After about 3 weeks in the fermenting bin, when the cider had cleared, the apples were scooped out and the juice strained into an air tight container with an air lock.

At this stage, it's advisable to monitor the frequency of the bubble-flobble through the airlock to make sure the cider is fermenting correctly. A rate of one flobble every 20 seconds to start with is about right, if it's slower than this try adding a bit more sugar or yeast. When the flobble rate slows down to one a minute, it's time to bottle up.

We poured the cider into bottles (plastic is probably wise!) and put some sugar in each to create bubbles - 4 tsps for a 1 litre bottle, double for 2 litre. After around 5 weeks it should be ready to drink. Ours looks impressively clear in the bottle but it does have quite a lot of sediment at the bottom which is impossible to avoid mixing into the poured drink - thanks to the lovely bubbles - but it doesn't affect the taste or mouth feel.

The final product is really very good - to my palate at any rate. It's quite dry but also light and refreshing and troublingly easy to drink. I think the key is finding apples which are sharp and not over sweet. If, like us, you have a number of wild apples trees to choose from, it's worth taking the time to get to know the characteristics of the different fruit. A good cider apple needs to be quite tannic, if you cut/bite a chunk out and it browns quickly, you're onto a winner. We've also made a 2nd batch, replacing the crab apples with japonica quince but that's not ready yet so goodness knows how that one will turn out.

I have no idea how strong the finished cider is but I'm finishing off that glass in the photo and let's just say the spell check is working overtime!
Posted by Tracey at 15:19