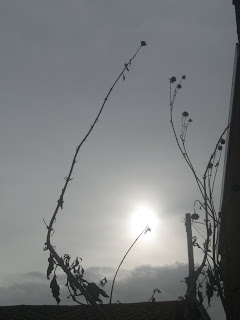 This post now seems to be mocking me! Last Hurrah? Back in September? Pah! A quick 15 mins in the garden today produced more than enough veggies for tonight's dinner, which seems amazing to me as a novice winter gardener.

I harvested a large pile of Swiss Chard which has perked up immensely since September. I seem to remember at the time we had a prolonged dry spell which caused the powdery mildew to attack everything in sight. The near constant rain ever since has produced lots of lovely, strikingly verdant new leaves. I also dug up a large bowl of Jerusalem artichokes - the first of the crop and just a tiny fraction of what remains in the ground (the photo is of wizened artichoke stems against a winter sky). The Chard I'll steam and serve buttered with garlic and the artichokes will be tossed in seasoned flour and shallow fried til gorgeously, crispy, nutty brown.

The November radishes and salad are also vying for harvesting attention and the pak choi/tatsoi could do with thinning a bit. (Thinning! In November!) I do have to admit defeat with the butternut squash though, it's a huge plant, stretching halfway down the front garden and it made lots of flowers but none pollinated and we didn't get any fruit.

I'm quite proud of the amount of produce we get from our tiny garden. When planning next year's crops I'm going to give serious thought to maximising yields in relation to space used, more of which anon. Now I just need the pesky chickens to start laying again ......
Posted by Tracey at 14:51