Winter in the Veg Patch 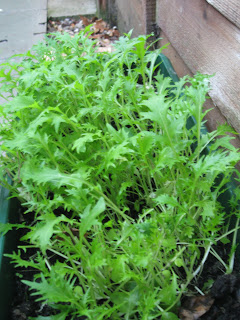 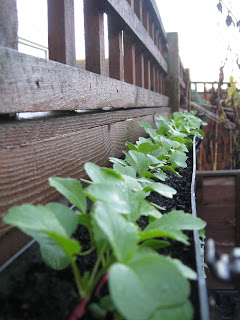 This is the first year I've attempted to grow winter crops and, so far, it's not going too badly. Pictured are my winter radishes growing in their freecycle skyscraper. Their progress is much slower than their summer brethren but they're still trundling along in a persistent manner. Also pictured is my mizuna, the original sowing went the same way as the first crop of radishes - chomped by Very Hungry Caterpillars while we were on holiday in August. I've decided I'm a huge mizuna fan. This is the first time I've tried it, it's very reminiscent of rocket both in taste and texture but it's slightly softer and milder so I find it more acceptable as a salad or stir fry leaf on it's own.

The Jerusalem artichokes look just about ready to harvest so I'll be chopping down the withered stems and leaves at the weekend but leaving the chokes in the ground where I'll pull them up as needed. Last year I saved a few to re-plant in spring but I've since realised there's no need as there are always loads in the ground that get missed and sprout up again. (even the neighbours have 'benefitted' from an accidental crop)

The mini greenhouse is looking good too, planted up with Pak Choi, Tatsoi and winter salad. Something is chomping in there though and I'm not sure what, the damage isn't devastating enough for slugs but surely it's too cold for caterpillars in November?

Next project is to initiate the Bokashi composting system. I'm hoping this works out as conventional composting can be tricky in a small garden so fingers crossed.
Posted by Tracey at 14:06