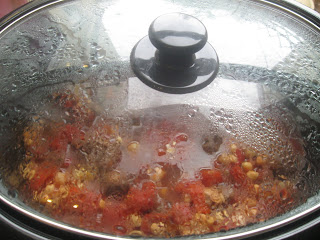 Is how Hugh Fearnley Whittingstall describes a surfeit of preserves. You preserve your glut then have a glut of preserves, which is what I am currently in possession of. I've come to view my jams and chutneys more as ingredients than as products in themselves, after all there's only so much jam and toast or pork pie and pickle any non-obese person can eat. I won't re-hash old ground but will instead refer you to Hugh's original article here which gives a few ideas.

This winter I'm experimenting with the preserve store in an attempt to add to his suggestions with a few of my own. I have previously given a brief mention to yellow bullace jam as a sticky glaze for chicken legs. I cook the chicken in the oven then brush it with warmed jam before putting it under the grill to caramelise and sprinkle with dried lavender flowers before serving. More recently I made Delia's Cumberland Sauce using sloe jelly in place of redcurrant jelly. It made a deliciously tangy sauce which I served poured over thin frying steak as this was before I learned it is more correctly served with white meat but, hey, we enjoyed it.

As I type I have a fragrant mutton tagine in the slow cooker. Thanks to Hugh's article, no stew in this house is complete without a dollop of chutney and today is no exception as alongside the mutton, chick peas, tomatoes and spices is a generous half jar of gooseberry chutney. I've also experimented with my Spiced Pear Chutney, as I mentioned before I was somewhat disappointed with it as a chutney as it tastes too much like cold curry but stirred into a slow cooked stew and served fresh flat bread and raita, it really comes into it's own. The mutton I have stockpiled in the freezer is the perfect foil as the sharp, sweet chutney flavours cut through the fatty meat.

Today is Adam's birthday so for dinner tonight, alongside the tagine we're having sesame bread and possibly a few jerusalem artichokes if I can be bothered to dig some up! But we're definitely having River Cottage pear cake for dessert - it's all done for Adam's benefit obviously, it's not like I'd use his birthday as an excuse or anything, oh no, perish the thought .....
Posted by Tracey at 11:35