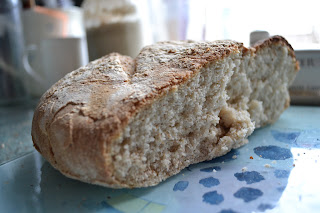 Finally! I have a successful sourdough loaf! Admittedly, I don't have holes as large as I'd like but it has a soft, light interior and a dense, chewy, flavoursome crust so I'm not complaining! I swapped to Dan Lepard's recipe which I found much easier, less time consuming and more successful than the River Cottage sponge making version I had been using.
It's a nice place to be - good enough to make an enjoyable loaf to be proud of but more than enough room for improvement to keep the interest alive (and hopefully the starter too!)
I've now reached the point in the Norfolk Kitchen year when the blog quietens down as I don't have a great deal of foraging or allotment activity going on in the winter. I don't even have a Christmas Presents series this year as I've decided to give my long suffering family a break from home made presents (apart from Hot Chocolate on a stick which I will blog about separately)
My current winter creativity outlet appears to be sewing. I'm somewhat hampered by the fact that I'm an utter dunce in this arena, straight lines and hems are about as far as I get. I prefer not to think about buttonholes and zips and the like unless I'm breathing into a paper bag so I'm quite proud of the 2 patchwork throws I made for the living room.
They're basically 9 50cm squares, sewn together in a block and backed with fleece. They're warm and soft, ideal for snuggling under while waiting for the central heating to kick in. I saw some in a local shop, made in exactly the same way for £45 each. Mine are made from scraps I had lying around plus a length of fleece which cost £25 for both so I'm feeling rather smug. Next up, helping Father Christmas with the stockings he asked me to make for the children - where did I put that paper bag ......