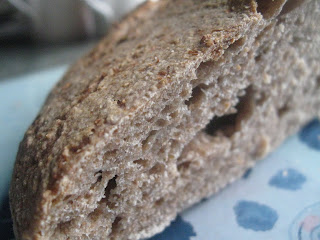 After watching the River Cottage bread episode I was inspired to try my hand at baking sourdough bread. Why sourdough? Well, it fits into the Norfolk Kitchen philosophy in a couple of ways. I was astonished to learn it's made with wild yeasts living in the air (I can't be the only person in existence who didn't know wild yeasts live in the air can I?) so technically it's foraging, plus it costs a fortune to buy so it's worthwhile learning how to do it. Oh and it's tasty, I particularly like the dense crust of sourdough and the loaves do look impressive.
So my journey began back on 6th November when I began the starter. (I've got the River Cottage Bread book and used that as my guide) I used organic spelt which took a little while to get going but once I got it into a warm enough spot in the kitchen it bubbled like a cauldron, in fact, I had to move it into the chilly bathroom to slow it down a bit.
I finally got around to making the bread yesterday, it needs babysitting so it has to be done on a day when you're happy to stay close to home and it also takes some planning. I made the sponge on Monday night then kneaded the extra flour in on Tuesday, then shaped it again, and again, and again before finally getting it into the oven at Tuesday teatime. (Do I get an award of some sort from Citi Slow?)
And the result? I made a flat thing - as Kipper might say. The bread is tasty but it's not as light and airy as the bread in the book, I'm thinking this is probably because it was made from stoneground wholemeal flour which makes a dense loaf at the best of times, plus I may not have used enough of the starter. I reduced the quantities given in the recipe so was guessing half a ladle of starter by eye. Next time, more starter and half and half white and wholemeal flour I think. If any sourdough aficionados out there have any advice on producing a lighter loaf, please share!
By the way, I've been nominated for a Dorset Cereals little blog award, if you're of a mind to do so, please feel free to vote for me! (widget on the left of the screen) I have one lonely vote at the moment - thank you! 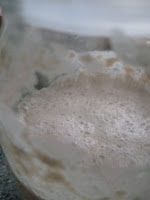