The Good Life gets closer! 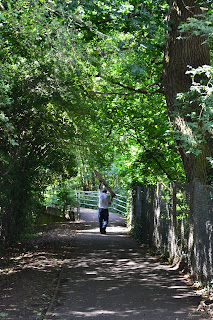 Our goal of expanding the Norfolk Kitchen empire into livestock by raising our own rare breed piggies in a local woodland is moving closer to reality.
You may remember back in April I talked about my involvement with Diss Community Farm. It's a community project a group of us have put together, initially in the hope of opening a community run farm next year. Things moved quicker than we anticipated though as we were offered 2 small plots of land, one for a vegetable growing pilot project and one for a pork raising pilot. I'm not personally involved with the vegetable project as I'm pretty much set up for my veggie needs with my allotments but I'm throwing my full enthusiasm behind the livestock project.
We've now formally launched the piggy project, we have about 16 people signed up to pay for the meat and to help look after the pigs. The big news is that we've secured a grant from a local company which will pay for our set up costs of things like fencing, pig arcs, feed bins etc This means that it's all systems go on the shopping front and we have a few days of hard work in front of us to get materials on site and to build the fences. (the photo is one of our members carrying one of about 60 pallets to the woods to be re-cycled as fencing)
It's really exciting to be actually moving forward at last. The land we're using is a small woodland of about 2.5 acres bordered by the River Waveney on one side, so it's a fantastic natural environment for the pigs and for small children too! The girls love playing in the woods, climbing trees and splashing in the river. I have to admit that buying into this kind of lifestyle for the children has been a major factor in my motivation for being involved in this project (that and making my own sausages and bacon) I'm really looking forward to a long, hot summer of visiting the pigs and playing in the woods.
By the way, if you're interested in what we're doing, we're having an open day at the vegetable growing pilot on Sunday.
Posted by Tracey at 10:58