"The time has come" the gardener said, 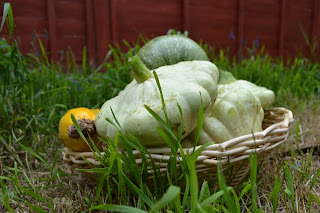 "to talk of many things, of sheds and hoes and summer squash, of cabbages in spring" (with apologies to Lewis Carol)
I got a phone call last night from the secretary of the allotment association at our new Diss plot. We're not allowed our own sheds down there but instead have to rent one of the block of Council built sheds for the princely sum of £2 per year. The only trouble is that since the plots were divided in half there are half as many sheds as plots so there's a waiting list to get a shed. I've been waiting since I took on the plot in October and the phone call last night let me know I'd finally got to the top of the list so the upshot is - I have a shed!
This morning I went to investigate and transfer numerous things from our garage to the shed - including my treasured wheel hoe. It's much more convenient to keep it on site but I am a bit nervous about security, I'd be very upset if it was stolen. Not so much for the monetary value but the difficulty of getting hold of a replacement.
Now, I may not be cabbage looking but the purple sprouting broccoli certainly is. I bought a tray of seedlings from a car boot sale a couple of months ago, planted 5 of them, 4 have come up as broccoli but one has turned into a cabbage! Quite what my fellow allotmenteers make of me growing a single cabbage I don't know. Probably not as much as me growing enough summer squash to feed an army.
Talking of which - one of my growing goals this year was a basket of mixed summer squash and today I achieved it. I picked my first Patty Pan squash, aren't they amazing? I've not grown them before and I think I may have let these ones grow too big. I was waiting for them to turn snowy white like the picture on the seed packet but they're stayed vaguely green tinged, I'll probably pick them smaller in future. But look, Patty Pan squash, yellow courgettes and stripy courgettes, crook neck squash to come in the near future. This is why I have an allotment, you can't buy a basket like that in Tesco - I've got mixed tomatoes in my sights for next year.