Is next year always the perfect year? 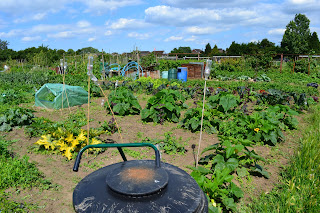 Because this year never is never quite up to scratch. There's always that little tweak which will make next year the best one ever.
2008: I started small scale veg growing in my teeny tiny back garden. The mistakes were many and varied. I didn't even realise that broad beans aren't climbers and optimistically planted 3 plants inside a bamboo wigwam and was surprised when I only grew enough for one tiny meal. Next year, I thought, I'll know better.
2009: Had a more realistic idea about yields. Didn't do too badly, learned my mosaic virus lesson, started this blog. Refined my plans and felt confident of next year being the best back yard year ever.
2010: Acquired an allotment! Great news but scuppered best back yard plans as focussed on the allotment instead. Scaling up was a shock to the system and we struggled to keep the weeds under control. But I had ideas, made plans, changed tack slightly. Next year will best growing year ever.
2011: Acquired a second allotment! Great news but totally changed the face of my plans for my original allotment due to the need to incorporate a 'split site' strategy. Plans for re-arranging the original allotment severely curtailed by the dry spring locking my fruit beds into the concrete like clay soil. Come Autumn, I'll catch up with the re-arranging then next year I'll be able to instigate my plans properly. The manure is rotted and ready to go, my weed control strategies are in place, I know the difference between vine and bush tomatoes - it'll be the best growing year ever! (Won't it?)
Posted by Tracey at 12:19