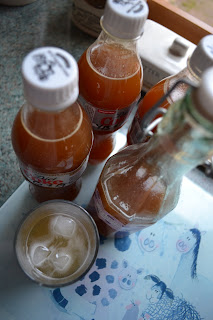 It's only 3pm and I'm sipping a whiskey with Mirabelle and Ginger Cordial. All in the name of research you understand. Pity we didn't have any limes because a twist would've made it perfect.
Mirabelle and Ginger Cordial.
I'm calling the yellow bullace Mirabelles for this recipe as it sounds posher. I took about 2 or 3 kilos (didn't weigh them first) and simmered them in about half a pint of water til they were soft, bashing them up with a wooden spoon and a potato masher along the way to help the juice come out. Once they were cooked I strained them through a muslin lined sieve until the juice had dripped through. For every litre of juice I added 700g light brown sugar plus a tablespoon of ground ginger. I then warmed it through til the sugar dissolved.
And here the ginger problem began. It was the devil's own job to get rid of little clumps of ground ginger which dispersed grittily through the cordial, giving an unpleasantly strong gingery hit if you got one in your mouth. I whisked it which helped with the bigger lumps but made no difference to the smaller ones, in the end I strained it through a tea strainer while bottling up. Next time I may try fresh ginger juice instead although any tips on dealing with ground ginger would be gratefully received.
The children aren't madly impressed with this one but I remember hating ginger beer when I was Willow's age and this cordial leaves a definite lingering warmth on the tongue. It's not got the impressive glowing colour of it's companion, cherry plum cordial, having a rather more sludgy appearance (am I selling it?!) instead. Personally I really like it's sweet/sharp toffee edged flavour which makes me think of Christmas.
As aforementioned, I decided to mix up some cordial with whiskey, just for research to see if it worked and enable me to report accurately on the blog. Honest. As I say, a twist of lime seems to be missing but other than that it's a lovely drink. Feels like it should cure ailments at 10 paces. I'm sure other dark spirits would work well too, or as a syrup over vanilla ice cream.
Posted by Tracey at 15:18