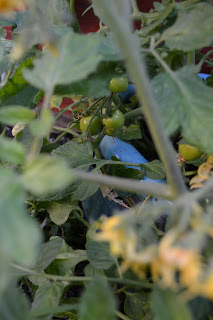 2011 is the year I actually pay attention to my tomatoes. For the last 3 years or so I've bought a few garden centre plants, put the Gardener's Delight in the mini greenhouse and the Tumbling Toms in hanging baskets, watered them but little else.
A friend of mine called round last summer and expressed loud dismay at the state of my greenhouse whose plastic seams were creaking with the effort of containing plants of Little Shop of Horrors proportions. I did have a decent yield of tomatoes, enough to use fresh plus home made ketchup and green tomato chutney, but the tomatoes were all tiny and I'm greedy so if I can get more bang for my buck then so be it.
This year I have decided to pinch out in the approved way in the hope of getting bigger tomatoes. I'm finding all the greenhouse fiddling a bit tedious to be honest and the blasted things insist on growing every 5 minutes, it's housework outdoors really. I'm starting to wonder if it's worth it considering I had enough last year but we'll see. Maybe next year I should stick to bushy varieties and leave them to their own devices.
I'm also a bit worried about a couple of plants who seem to be yellowing excessively. I know it's usual to yellow around the bottom but it's usually later in the season and this time only a couple of plants are affected. As far as I can tell they're adequately watered and fed. One of the plants in question is pictured below so any opinions on the cause will be gratefully received.
My tomato Holy Grail is a tomato salad like the one Jamie Oliver made in his 'At Home' series which featured loads of different types of tomatoes, yellow, green, stripy, purple etc etc. I've hopefully gone some way towards it this year, I've got Gardener's Delight (seeds free from Mumsnet!), Mr Stripy (bought seeds), Tumbling Toms (bought seeds), Roma (plants donated by a friend) and hopefully some yellow ones (plants donated by another friend who thinks she may have got her seedlings mixed up)
Ideally, if I had, say, 9 plants, I'd like them to be 9 different varieties. The problem with this is that I'd have to buy 9 packs of seed as I wouldn't get 9 varieties of plants in my local garden centres. From the 9 packs of seeds I'd only use a few then what would happen to the rest? Would they keep long enough to use the next year? Or would they go to waste? This is all starting to look a bit expensive too ....
But look what I found yesterday! Packets of mixed seeds! With a picture looking like Jamie's salad! Now if only I could find courgettes packed in the same way, I'd be a happy bunny!